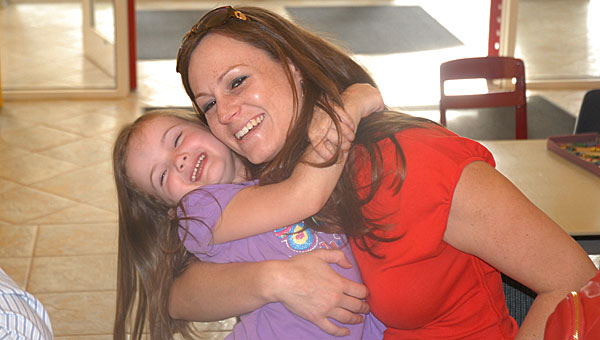 Smiles, laughter and even a few tears from parents filled the foyer of Alabaster’s Meadow View Elementary School April 3-4 as parents registered their children for kindergarten.

The school set up several tables for parents to fill out paperwork, and a shorter table for the kindergarteners-to-be to color and get to know their future classmates.

“We’ve already given out more than 100 registration packets,” said school volunteer Karen Duke. “We’ve had a few parents get teary eyed, but most have been OK.”

For Alabaster resident Cristy Bell, who was at the school registering her step-daughter, Ella Grace Cherry, next year will not represent much of a change in her household.

“She’s already in daycare, so I don’t think it will be much of a change next year,” Bell said as Cherry colored with other future students at the kids’ table. “She’s excited, though. This morning was probably the fastest she’s ever gotten ready.”

Alabaster resident Wendy Sandlin also came to the school on April 4 to register her daughter, Harper. The first day of school next fall is a day Harper has been looking forward to for years, Sandlin said.

“I’m ready, and I know she is. She is very excited to get to go to the big school,” Sandlin said with a laugh. “She has literally been crying to go to big school for months.”

Each spring, MVES holds a school visit and orientation time for the kids entering kindergarten the following fall. This year’s event will be held on Wednesday, May 9 from 9-10 a.m. in the MVES cafeteria, and will be open only to upcoming kindergarteners and their parents, said MVES Registrar Teresa Davenport.

During the orientation, school officials will give kindergarten students and their parents a tour of the school and have a snack with their future classmates. This year’s orientation will have a jungle theme, and will feature a reading of the book “Rumble in the Jungle.”

“It’s really a great program,” Davenport said. “We usually have about 100 or so come to that. It’s just for the 5-year-olds, and they always get really excited.”