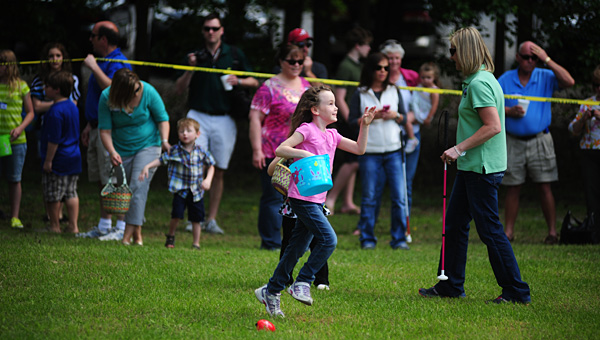 Rachel Elizabeth, center, rushes off in search of Easter Eggs during an AAPVI hosted egg-hunt on April 7. (Reporter Photo/Jon Goering)

HARPERSVILLE -Gage Patterson, like many other children, has been hunting Easter eggs for years the only difference is Patterson lost his vision at 5 years old.

Patterson and many other kids gathered at a private farm in Harpersville for the seventh annual Easter egg hunt and multi-sensory puppet show put on by the Alabama Association for Parents of the Visually Impaired.

Members of the International Association of Bomb Technicians and Investigators constructed 48 electronic beeping Easter eggs for the children to hunt. Each egg cost $14.50 for the electronics used to make the eggs beep.

Patterson, like many of the other children, said his favorite parts of the egg hunt are collecting candy and making new friends.

“It’s easy for me to find the eggs because they beep,” he said. “I follow the beeping sounds, until I find them.” 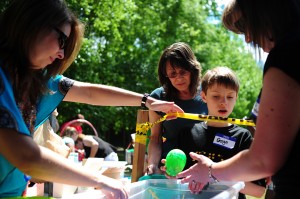 Seven-year-old Rachel Elizabeth,  an independent visually impaired  participant, said her favorite part of the event is the candy she gets from the egg hunt.

Rachel, who refused to accept help during the hunt, found nine eggs in nearly five minutes.

“We do a lot together and  the kids know each other,” said David Hyche,  who works closely with the Alabama Association for Parents of the Visually Impaired and has a visually impaired daughter. “We do mentoring for families who have similar cases and the parents maintain relationships with each other.”

Chantal McManus , the president of AAPVI and a private teacher for the low vision and blind said the event helps children to develop social skills with one another.

“They socialization and meeting each other is great for them, McManus said. “Parents who have older kids that are too old to hunt eggs come and end up mentoring the younger kids. It’s a very empowering place to come from.”

McManus said being visually impaired is very isolating and some of the children are the only blind or low vision children in their school.

“A huge part of my job is  leveling the playing field for these children to make sure they get the same opportunities as everyone else,”  McManus said. “You can’t do so much that you cripple them. They are learning to be comfortable with their blindness and they need to make others comfortable with it too.”