The academic champs of PHS 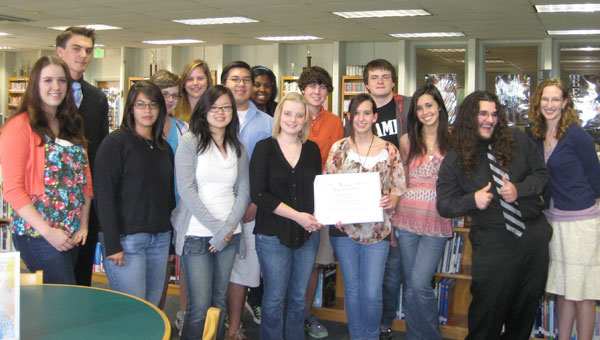 When Pelham High School varsity scholars’ bowl coach Lee Short saw her team finish with time to spare in a worksheet competition on the amendments, she was stunned.

“I was afraid they had given up on the worksheet and were leaving answers blank,” Short said. “When my team saw my stunned expression, they smiled confidently. Final scoring revealed they had all of the questions correct and received the maximum points possible. Coach Schrupp’s AP US history class had just studied the amendments. Seeing how pleased and confident the students were was awesome.”

Short has watched her team succeed repeatedly this scholars’ bowl season. In February, the PHS varsity scholars’ bowl team won the Shelby County Championship. In March, the team competed at the University of Alabama for a region showing that secured them a bid to the state competition, where they competed impressively again.

Last week, our PHS varsity scholars’ bowl team took their victories on air when they were named the Charter Communications Academic Team of the Week. Charter taped a 30-second TV spot featuring the PHS scholars’ bowl team, which aired locally on stations such as ESPN, CMT and MTV last weekend.

“I wanted to coach because I wanted students to have the positive experience I had,” Short said. “Being on the team helped me find a niche-something that I could do confidently and feel good about in high school. I hope it’s done the same for students that I’ve coached.”

Teammates Sam Robison, Tracy Kimbrell and Emily Rames agree that the fun they have competing against one another at practice is great. “We learn to help each other by understanding our teammates’ weaknesses and strengths,” Rames said.

“We do buzzer practice. We ask questions and practice buzzing in as quickly and correctly as we can. The students always do something to make me laugh,” Short said. “They take the game seriously, but don’t usually take themselves too seriously.”

Listing next year’s team goals, Short said “Have fun, continue doing the best that we can in each tournament, work on some weak areas-and keep our County Championship trophy.”

A Panther win to remember