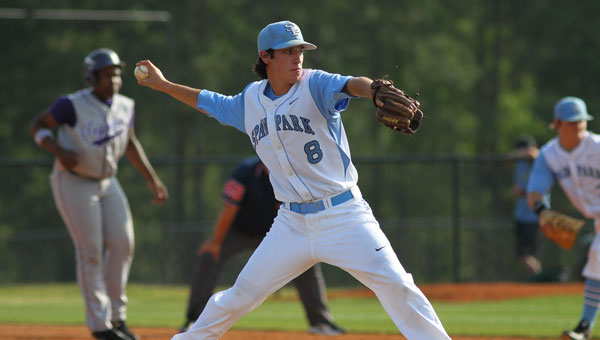 Spain Park High School senior Hunter Hall delivers a pitch to the plate in a game against Minor in the first round of the Alabama High School Athletic Association Class 6A playoffs April 20. (Contributed/Jimmy Mitchell)

The Jaguars defeated Minor 14-0 in the opener.

Will McDonald led Spain Park offensively as he finished two hits, including a double. McDonald also drove in a team-high three runs.

Josh Close, Hall, Cowart and Barrentine drove in two runs each. Rich and Paul Angel drove in one run each.

Hall earned the win after giving up just one hit while recording 10 strikeouts in a complete-game victory.

Freeman, who drive in a team-high three runs, led the Jaguars with a homer in the victory.

Grant Veteto added a double and drove in two runs. Close and Hall finished with one hit each. Angel drove in one run in the victory.

White, who earned the win on the mound, didn’t give up a hit while recording eight strikeouts in four innings. Freeman finished with four strikeouts in a relief appearance.

Briarwood Christian School junior Daniel Robert swings at a pitch during a game against McAdory in the first round of... read more