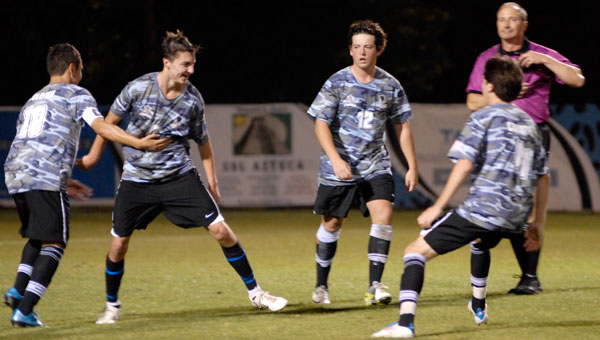 HOOVER — The choice was an easy one for Spain Park High School senior Jacob Taggart and his teammates on the Jaguars’ boys’ soccer team when it came time to choose a community service project.

Spain Park coach Joe Carter tossed out the idea of supporting the Wounded Warrior Project, a foundation set up to honor and empower armed forces veterans who incurred service-related injuries, and his players were ready to get started on details.

“We just thought it was important to help the veterans,” Taggart said.

The Jaguars’ involvement with the Wounded Warrior Project culminated with a friendly against neighbor Briarwood Christian School in the regular season finale for both teams. The Spain Park community raised more than $2,000 for the project during the night April 24 while the watching the Jaguars post a 2-0 victory over the Lions.

“It was a really good night,” Carter said. “The guys really got on board with it.”

The Marines, who were represented by Staff Sgt. Trevor Walker, held a pull-up challenge and wall climbing experience simultaneously during the game. The teams also wore commemorative jerseys during the match, with proceeds benefitting the foundation. Walker was also presented with the game ball from Spain Park senior Spencer Jack before the match.

While fans in attendance were partaking in physical challenges a few feet away from the playing field, the Jaguars consistently challenged the Briarwood Christian defense.

Taggart’s two first-half goals made the difference in the victory.

Taggart gave the Jaguars a 1-0 lead with 12:46 remaining in the opening half as he fired a shot from approximately 20 yards out, blasting it right between the legs of Briarwood Christian goalkeeper Jordan Box.

Spain Park pushed its lead to 2-0 following Taggart’s second goal. Taggart beat Box for a breakaway goal in a one-on-one situation with 1:26 left in the first half.

The Jaguars and the Lions both had scoring chances during the second half, but neither side could net a goal.

Taggart said the battle against Briarwood Christian, one of the top Alabama High School Athletic Association Class 5A teams in the state, will help prepare the Jaguars for their Class 6A playoff opener April 27 against Pelham.

“I feel like we’re going to have a lot of momentum,” Taggart said.