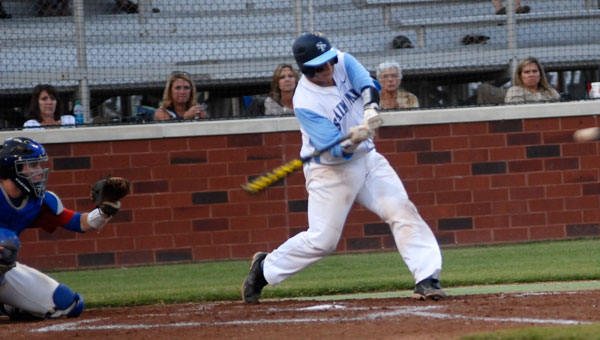 Spain Park High School senior Grant Veteto swings at a pitch in the Jaguars' 10-2 win over Vestavia Hills in the second round of the Alabama High School Athletic Association Class 6A playoffs April 27. (Reporter Photo/Wesley Hallman)

Smith thought senior Colton Freeman shined the brightest in his lead-off at-bat in the top of the seventh inning with the Jaguars facing the end of their season April 27 in the second round of the Alabama High School Athletic Association Class 6A playoffs against Vestavia Hills.

Freeman, who had a costly error in right field to allow the Rebels to plate the go-ahead run in the bottom of the fourth inning, lined a single to right field, which sparked a 9-run inning and helped the Jaguars overcome a one-run deficit in a 10-2 win over Vestavia Hills.

The Jaguars’ victory set up a winner-take-all third game April 28 at 1 p.m. Spain Park fell to Vestavia Hills 5-1 in the opening game of the series.

Jon Sumner led Spain Park offensively in the nightcap as he finished 2-for-3 at the plate with a homer, his first of his varsity career, and a double. Sumner drove in two runs and scored one run in the victory.

White earned the win on the mound after giving up two runs, including one earned run, on six hits with four strikeouts in a complete-game victory.

Close led the Jaguars offensively in a 5-1 loss in the opener as he finished 2-for-4 at the plate.

White went 1-for-4 with a double and scored Spain Park’s lone run in the game. Angel went 1-for-1 at the plate and drove in one run. Veteto finished 1-for-3 at the plate.

Hall took the loss after giving up five earned runs on eight hits with one strikeout in a complete game.

Briarwood Christian School junior Cameron Adams delivers a pitch to the plate in the Lions' 4-1 win over Hueytown in... read more