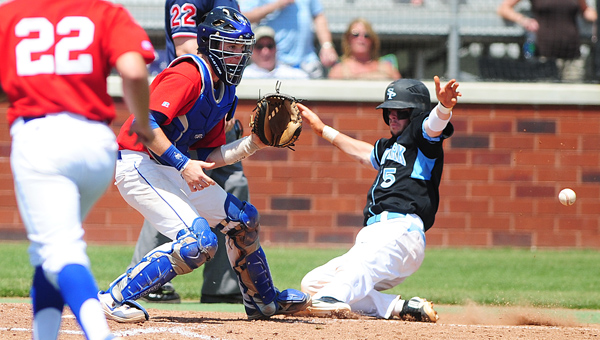 HOOVER — The Spain Park High School baseball team overcame an early deficit after posting a pair of big innings in a 10-4 win over Vestavia Hills in the deciding third game in the second round of the Alabama High School Athletic Association Class 6A playoffs April 28.

Spain Park will face Pelham in the third round of the Class 6A playoffs May 4-5.

The Rebels jumped out to a 3-1 lead following the first inning, but the Jaguars scored four runs in the second inning and five runs in the third inning to coast to victory.

Mikey White, Paul Angel and Veteto sparked the third-inning outburst with RBI singles in the inning.

Josh Close led the Jaguars offensively as he finished 3-for-4 at the plate. Close drove in two runs and scored two runs in the victory.

Colton Freeman earned the win on the mound after giving up four runs, including just one earned run, on two hits with eight strikeouts and eight walks.

Rich finished with one strikeout without giving up a run or a hit in 2 1/3 innings in relief.

Pelham High School senior Parker Curry delivers a pitch to the plate in the Panthers' 7-5 win over Hoover in... read more