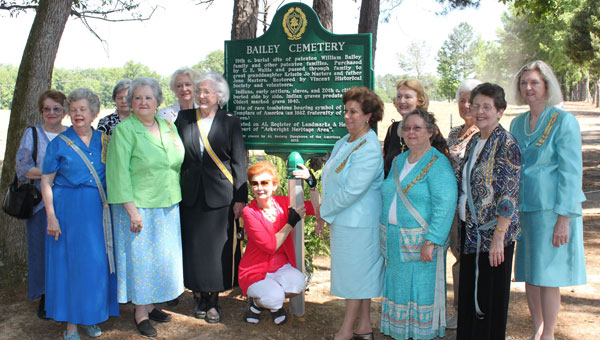 By BOBBY JOE SEALES / Special to the Reporter

ARKWRIGHT – Approximately 60 people gathered Saturday, April 28, in the Arkwright community on Shelby County 62 for a historic marker dedication of the Bailey Cemetery

The cemetery was listed in August 2011 on the Alabama Register of Landmarks and Heritage as a part of “Arkwright Heritage Area.” The event was hosted by the Vincent Historical Society and the local community of Arkwright.

The Vincent Historical and Environmental Society, under the leadership of Judy Naugle and Ann Gibbons, began with a group in June 2011 and culminated the Bailey Cemetery’s restoration.

“The community has come together and has done a remarkable job in cleaning and preserving this cemetery,” Gibbons said.

The piles of stones in the cemetery are Indian graves, and many of the early death dates are before 1850. A display was set up by Peter Datcher about his family members and the family farm that is in the community. Many lived, died and were buried in the Bailey Cemetery during the slavery period. Handmade, white wooden crosses marked many of the graves. These markers were made by the Vincent Historical and Environmental Society. Information was available about the Mosaic Templars of America, furnished by Bryan McDade with the Mosaic Templars Cultural Center in Little Rock, Ark.

This historic marker was contributed by the Alabama Society Daughters of the American Colonists as the State Regent’s project for 2009-2012. Carolyn Drennen, the past state regent, and the current state regent, Helen Hahn, did the dedication of the marker. The benediction was given by Linda Graham of the ASDAC.

The cemetery holds graves of Indians, early settlers, slaves and 20th-century citizens. The property was purchased by E.E. Wallis and passed to great-granddaughter Krissie Jo Masters and her father, Jene Masters.

An 1842 epitaph on one of the makers reads, “Remember girls as you pass by, As you are now so once was I. As I am now so you must be. Prepare for death and follow me.”