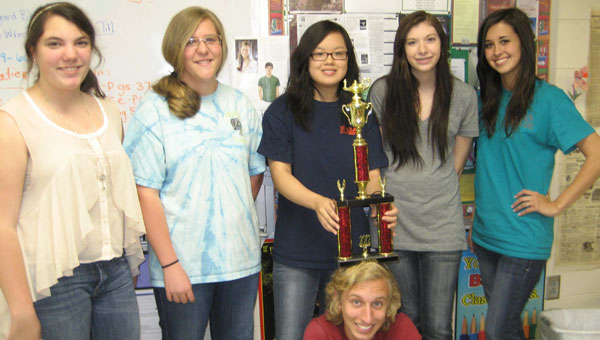 Coach Rebecca Burnett huddled up her Battle of the Books Team. “OK, guys, if you want to win,” she said intensely, “you have to buzz in quickly and get every answer for every question of the next round right!”

Top PHS valedictorian Sunny Chang groaned, “Mrs. Burnett, I know you don’t mean to, but that stresses me out so badly to hear you say that!”

Although Burnett’s intentions were not to stress out her team, she knew how much this Battle of the Books team wanted to win. She had watched them give up countless afternoons in her classroom for buzzer practice. She knew they’d spent many more hours on their own reading the county-chosen books that are the subjects of the annual Battle of the Books contest. Also, Burnett admits, “OK, I’m really competitive — I want to win.”

Burnett puts in a great deal of work to prepare her BOB team for this competition. First of all, she selects the BOB team. Competition to be a member of our county champion BOB team is intense.

New books are chosen every year to compete with. The BOB list usually includes an Alabama author, a memoir and always fiction. All of the books are high-interest reads. Many PHS students read the books after they hear other kids and teachers talking about them.

This year’s books included Bragg’s “All Over But the Shoutin’,” Roth’s “Divergent,” Card’s “Pathfinder,” Wallace’s “Diamond Ruby,” Whitney’s “The Mockingbirds” and Zadoff’s “My Life, the Theatre and Other Tragedies.”

“My least favorite part of coaching BOB is choosing the team,” Burnett said. “I wish everyone who wants to join the team could, but the county designates how many competitors we can bring.”

Team members are chosen based on their test scores on the books. Burnett attracts readers to her because she is so passionate about reading. “My dream day off is to be able to read all day,” she said.

This year’s PHS BOB team achieved a three-peat by winning their third county championship. “We have been the undefeated county champs three times,” Burnett said.

By undefeated, Burnett means that not only did the PHS team win, they also lost no matches during competition.

“We have met authors and learned about amazing books through this competition,” Burnett said. “We also love to compete and I love that we can do that through books.”

Writing is a journey