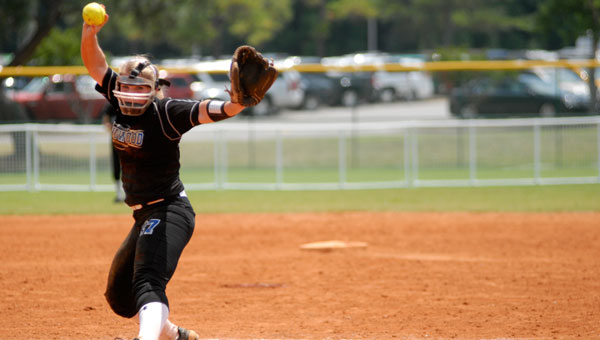 Kingwood Christian School senior Madeline Lee delivers a pitch to the plate in the Lions' 8-5 loss to Glenwood Academy in the Alabama Independent Schools Association Class 3A state tournament May 5 at Lagoon Park in Montgomery. (Reporter Photo/Wesley Hallman)

“We came within an eyelash of the state championship game,” Ingram told his players.

Meanwhile, Glenwood Academy plated three runs with the help of international tie-breaking rules, a baserunner starting the inning at second base, to escape with a hard-fought victory.

“We gave it a shot and came up just a little bit short,” Ingram said.

Madeline Lee, the Lions’ senior leader, provided the highlight offensively in the game with a two-run homer, which marked a school record 24th homerun of the season. Lee finished 4-for-4 at the plate and scored two runs.

Lee also pitched a complete game in the circle and finished with four strikeouts.

Karley Chamblee finished 2-for-3 at the plate and scored one run. Kaylyn Ingram, who finished the season with 12 homers, went 1-for-4 at the plate.

Katie McElroy finished 1-for-3 at the plate with a double. Kaylee Morris went 1-for-4 at the plate. Blair Holsombeck and Caroline Clark scored one run each.

The Lions (33-11) won three games on their way to the consolation bracket final. Ingram said his players were playing their best softball of the season entering the AISA Class 3A state tournament.

“The girls peaked at the right time,” Ingram said.

Ingram also praised several players for stepping up this season in the absence of former Kingwood Christian standouts Whitney Gillespie, Erin Jones and Jordan Gray, who each left the program in the offseason.

“Some of the other girls picked up the slack,” Ingram said.