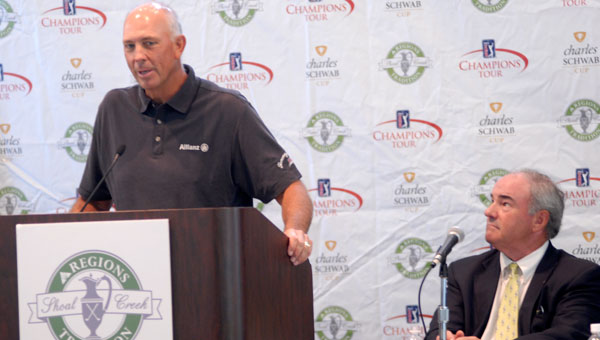 Lehman knew the effort it took to put on a first-class major championship.

“It was not an accident,” Lehman said. “It comes with a lot of blood, sweat and tears, and vision.”

Lehman, a Scottsdale, Ariz. native, returned to the site of his major championship on the PGA Champions Tour on May 7 for the Regions Tradition Media Day press conference at the Shoal Creek Town Hall.

Lehman will attempt to defend his title during the tournament, which earned the PGA Champions Tour’s prestigous President’s Award last year as the best tournament on the tour. The Regions Tradition festivities will begin with a celebrity pro-am on June 6. Tournament play will take place June 7-10. Lehman defeated Australian Peter Senior in a playoff to secure the major championship in 2011.

Lehman, who had never played a round at Shoal Creek before last season’s Region Tradition, said he was joyful to back at the course.

“It’s a pleasure to be back,” Lehman said. “There are a lot of good memories here.”

Following his major championship at Shoal Creek, Lehman went on to capture the Charles Schwab Cup in his first season the PGA Champions Tour and was named the circuit’s Player of the Year.

Lehman is the only professional golfer to be named Player of the Year on all three major tours, the Hogan Tour, the PGA Tour and the PGA Champions Tour.

“It’s something I’m really quite proud of,” Lehman said.

Jerry Pate, a former University of Alabama golfer and a Shoal Creek member, and Jim Gallagher, Jr. were each given sponsor exemptions to play in this year’s Regions Tradition, which will be televised nationally by The Golf Channel for the second consecutive year. The complete field will be announced at a later date.

Former U.S. Secetary of State Condoleezza Rice returns as the Regions Tradition honorary chairperson and is planning to play in the tournament’s pro-am for the second year in a row.

Regions is in the second year of its contract as the major championship’s primary sponsor and Children’s of Alabama returns as the primary charity for the tournament.

Children’s, which assisted 60 children from 14 different counties in the state of Alabama following the April 27, 2011, tornadoes, was named the PGA Champions Tour’s Charity of the Year.

“We’re delighted to be recognized as the Champions Tour Charity of the Year,” said Mike Warren, chief executive officer of Children’s of Alabama.

Warren introduced a text-messaging based donation drive tied in with the Regions Tradition next month.

The Regions Tradition is still searching for volunteers in advance of next month’s tournament. Volunteers, who receive an opportunity to play a round at Shoal Creek for their service, can sign up at RegionsTradition.com.