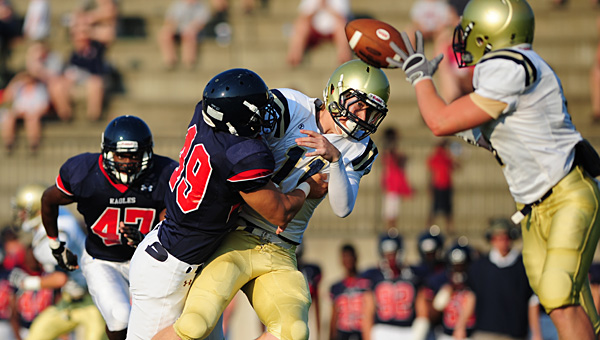 Briarwood Christian School quarterback Daniel Robert is tackled by Oak Mountain defensive end Lloyd Time just as he pitches the ball to a teammate in the Lions' spring game May 19 with the Eagles at Heardmont Park. (Reporter Photo/Jon Goering)

NORTH SHELBY — Briarwood Christian School rising senior Daniel Robert didn’t get much work this spring behind center after missing a few of the Lions’ practices due to a run in the baseball postseason.

Robert saw extensive action at quarterback in Briarwood Christian’s annual meeting with neighbor Oak Mountain in a mixture of situational work and a two-quarter scrimmage May 19 at Heardmont Park.

Briarwood Christian coach Fred Yancey was pleased with his signal caller, formerly the Lions’ top threat at wide receiver, after seeing him lead the team in a 7-7 tie with the Eagles in the spring game.

“(Robert) has played quarterback for four days,” Yancey said. “He did a nice job.”

Robert capped the night for the Lions’ first-string group with a 43-yard touchdown strike to wide receiver Brayden Housel with 17 seconds remaining in the varsity quarter. Placekicker Jordan Box added the point-after attempt, which tied the game at 7-7.

Oak Mountain, in its first time under the lights with new head coach Cris Bell, took a 7-0 lead in the varsity quarter following a 4-yard touchdown run by Jake Adams on a quarterback keeper and an extra point by kicker Michael Cole with 6:12 left in the quarter. The 4-yard touchdown run capped a 11-play, 55-yard drive by the Eagles.

Neither team scored in the junior varsity quarter of the scrimmage.

Bell got a good look at his team in the scrimmage, but the first-year coach said the situational work with different field positions and down-and-distance was just as important.

Yancey said he liked the scrimmage format, which was introduced by Bell.

“Coach Bell had some great ideas about how to do it,” Yancey said. “It was a good spring game.”

The Lions scored on a couple of different plays in the situational work, including an interception returned six yard for a touchdown by defensive back Barnes Bankston.

Oak Mountain scored on a play while working on inside the red zone situations on a 12-yard touchdown run by Harold Shader.

Chelsea's Alex Osborn, right facing, celebrates with her teammates after driving in the game-ending run in the AHSAA 5A State... read more