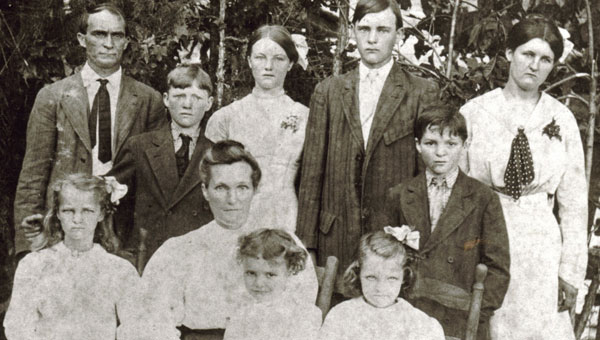 Redhaired, teenaged Reathie Kendrick (Gardner) is pictured with her family. She stands between two of her brothers on the back row.

My great-niece Loren Lawhorn and Caleb Crotwell were married May 12 in a beautiful ceremony on a farm in Montevallo.

Later, thinking about the recent wedding and young couple, I recalled a story from a hundred years ago that another bride told me around 1981.

“I think there are some people who were just meant for each other,” she said, speaking of herself and the man she married in June 1912.

It was over an old, relay telephone system at old East Saginaw that the young Reathie Kendrick first met Roy Gardner.

Reathie’s sister Ethel cooked for his family and got them on the phone with each other.

“Roy used to play banjo, and he played to me over the phone,” Reathie told me.

Then, one day, out walking with a girlfriend, Roy walked up behind them.

“I’d never seen him then,” she said. “But he walked on up and said something about which one he was going with. I said, ‘Which one of us are you talking to?’ He said, ‘You.’ And he walked on up the road with us and we went to his house for dinner. He came to see me every Sunday after that…

“The first time we heard each other’s voices (over the phone) a tingle just went all over me. And he said the first time he saw me, he knew it.”

After Roy and Reathie married, they followed Roy’s sawmill work a while, but returned to the Chelsea area to live on land homesteaded by members of Reathie’s family. Later they moved into a house near the old Coalville Post Office near K-Springs.

The house, which housed Coalville Post Office, still stands at Shelby County 39 and Gardner Drive, and is where the late Lillian Tuttle Moore, a long-time Chelsea school teacher, and her late husband, Willis Moore Jr., raised their family.

Reathie and Roy’s house still stands at Gardner Drive. This is where they lived together until Roy’s death in 1973, and where Reathie lived the remainder of her life with fond memories of her courtship and life with Roy.

And where we sat on her porch for her to share memories with me.

Thinking of Loren and Caleb just beginning their married life, I pray for them a long, happy life together and fond memories that will reach out into the future a hundred years and more.

Historic Weldon Store in Chelsea has been photographed, sketched and painted many times through the years. Now it is pictured... read more