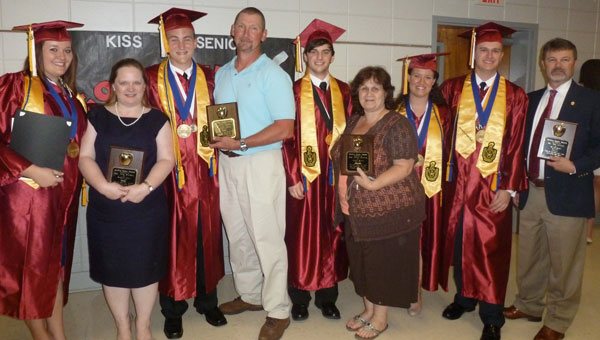 Each year, the valedictorians at Shelby County High School give an award called the Golden Apple at Senior Night to the person who has made a significant difference in their life.

Harrison Adams awarded his apple to history teacher and father Jim Adams who did not tell him how to live but rather showed him by his example. Adams will attend the University of Alabama with the Presidential Scholarship, Engineering Leadership Scholarship, Marine Scholarship Excellence Award, Academic Boosters Club Scholarship and the first Myra Stinson Vickery Scholarship Award. Adams played football and track, is a member of the National Honor Society and Beta Club.

Rachel Cole awarded her Golden Apple to English teacher Anne Stansell whose door was always open and taught her to stand up for what she believed in. Cole will attend the University of North Alabama. She was awarded the Academic Scholarship, Novella Club Scholarship and the Coach Davis Phillips Memorial Scholarship. Cole is the National Honor Society president, Beta Club vice president, SGA chaplain and SCHS marching band section leader.

J. P. Gravitt chose band teacher Tom Grigsby as his Golden Apple, who encouraged him in his music. Gravitt will attend the University of Alabama, where he has been accepted into the Million Dollar Band. Gravitt was awarded the Dean’s Engineering Excellence Scholarship, Collegiate Scholarship, Academic Boosters Club Scholarship and Kiwanis Club Key Club Scholarship. Gravitt played trumpet with SCHS marching band where he was the drum major. He is a member of the National Honor Society, Key Club Treasurer, Beta Club, Eagle Scout with Troup 560, Academic Elite, Youth Leadership Shelby County and Boy’s State.