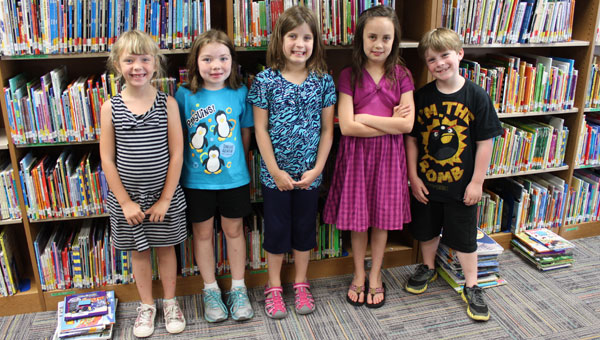 CALERA – Calera Elementary School uses the Accelerated Reader program as a way to encourage young readers to open a book and their imaginations.

“We don’t give grades for AR, but if that motivates them, then we have to recognize that,” CES Principal Linda Chesler said.

After a student reads an AR book, he or she takes a short quiz on the computer concerning literary comprehension.

Second-grader Abigail Snyder achieved the most AR points by the end of the 2011-2012 school year.

“She said she would read the most of second grade, and that motivated her,” Chesler said.

The wall outside the school’s library featured full-sized posters of the students who read the most for each month.

Snyder and Homan have been working their way through the Harry Potter series.

“It takes you places you’ve never been before,” Snyder said. “(Reading) takes you to a fairytale world or different state or country. Sometimes stories take place under the ocean.”

Davidson said she learns things she hasn’t learned before when she reads, while Odom enjoys reading books like Goosebumps and other scary books.

“I like reading because it’s fun and I have a lot of imagination in it,” Bush said. “I imagine stuff that isn’t in the book; I just imagine it.”

By KATIE MCDOWELL/Lifestyles Editor Shelby County students will have a longer summer break after the Shelby County Board of Education... read more