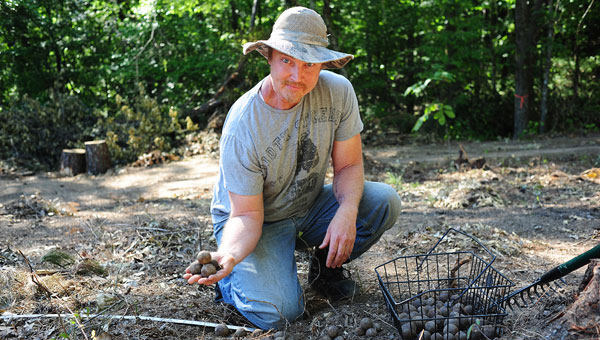 COLUMBIANA – When Dave A. Livesay II began clearing trees and debris from the property he recently purchased in Columbiaina, he unearthed pieces of history, which he believes came from the Civil War era.

Livesay, who purchased land off Shelby County 97, said when he began clearing his land, he uncovered a number of cast iron balls.

“It’s case shot they loaded in cannon balls,” he said. “About 30 fell out when we were raking.”

Livesay said he has done historical research with Shelby Iron Works, and used the Internet to compare his findings with similar artifacts.

“When I was in Germany, I used to walk the battlefields and used to preserve whatever I found. I intend to preserve these,” he said.

Jerry Willis, who is involved with Shelby Iron Works, said Shelby Iron produced cast iron and wrought iron, and most of the iron went to Selma.

“I doubt very seriously that Shelby Iron did any manufacturing of ammunition,” he said.

Livesay said the case shot is in “good shape.”

“We don’t know how they got here,” he said. “I’m into history, so I figured it’d be a great find for Columbiana.”

By ALDO AMATO / Staff Writer COLUMBIANA – A lieutenant with the Shelby County Sheriff’s Office recently showed off his... read more