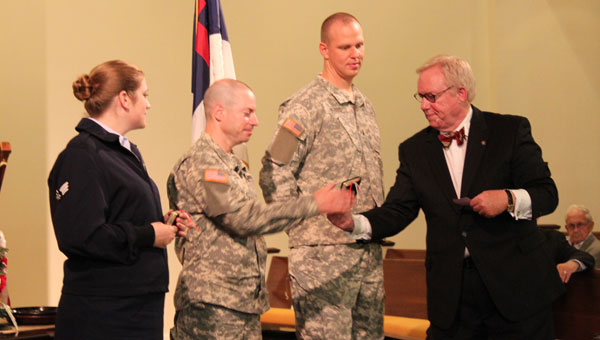 MONTEVALLO – The congregation of Montevallo First Baptist Church recognized men and women who served and currently are enlisted in the United States military.

Alabaster resident and local radio personality “Dollar Bill” Lawson read names off the church’s Wall of Honor, a record of past and present military men and women. The list included the name, war, station and rank of more than 75 veterans, including men and women from World War I to present conflicts.

“We started off just thinking we’d have a handful, but the response has been incredible,” Pastor Dr. Terry Sutton said of the names on May 27.

Three church members were recognized for their future deployment. Darrel Tubbs and Daniel Robitaille presented the flags during the service.

“The wall of honor is to recognized those who have served in any military,” Tubbs said.

Tubbs, Robitaille and Ashley Hancock were given pocket-sized New Testaments and prayer crosses to take with them overseas.

U.S. Navy Retired Lieutenant Commander Charles Turner said men and women join the military for a “number of reasons,” but the main reason is to protect the Constitution.

“It’s my theory that heroes are not grown or chosen from nowhere,” he said. “At the right time and right place, they perform. That has been this history of our military since the Revolution.”

Turner said this nation learned a lot after the Vietnam Conflict.

“What’s important to me is that we as a nation respect those who’ve served for us and those who serve today,” Turner.

“Today is a special day in our nation,” Sutton said. “I remember on several occasions people saying, ‘I’m so lucky I was born in America.’ We’re not just luck to be an American. We are blessed of God.”