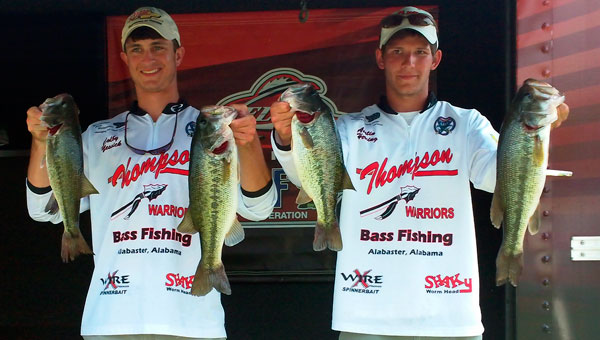 Herring and Yessick brought back a state championship trophy, along with several largemouth bass, after capturing the 2012 Student Angler Federation’s Alabama High School Fishing State Championship tournament May 26 at McFarland Park in Florence.

The pair finished on top in a field of 25 teams in the state tournament.

“We didn’t go there to finish second,” Herring said. “We are pretty pleased and excited.”

Herring and Yessick reeled in the limit of five bass in the tournament, with the catch weighing in at 15 pounds, 9 ounces. The duo edged Lee Mattox and Colby Sandlin of Cullman High School by 5 ounces to capture the title.

The bass fishing Warriors used several lures on the lake, including a red-eyed shad and a pumpkin seed shaky head worm, to reel in their bass.

“We started kind of slow and got into a bunch of striped bass,” Herring said. “We just kept pounding away and culling our way up.”

Yessick said he and his teammate went up to Florence on May 25 to prepare for the tournament, which left him with concern after seeing few bass remaining after a two-day collegiate tournament on the water.

“We pre-fished a little bit,” Yessick said, “but after two days of heavy pressure from the college guys we only were able to catch a few fish. We were quite surprised to find them right alongside the dam in 5 or 6 fee of water.”

Herring and Yessick advanced to a region tournament with state champions from nine different states at a location to be determined. The region winners advance to national championship tournament, where the winners will receive a $5,000 college bass fishing scholarship.

“I’m not going to get a scholarship for my grades,” Herring said, “so I’m going to try to get one for bass fishing.”

The state tournament field also included a pair of Pelham High School anglers, Tyler Howard and Jordan Humphries. The Panthers finished in a two-way tie for 11th overall in team standings after reeling the limit of five bass, which weighed in at 9 pounds, 9 ounces.