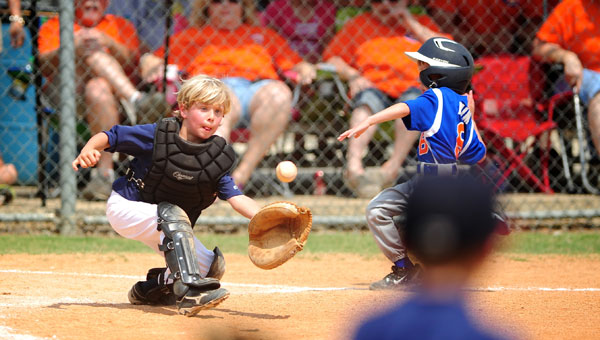 Noah Gasner, the catcher on the Calera 6-and-under all-star team, attempts to make a play at the plate in his team's win over Clanton in an Invitational tournament June 3 in Columbiana. (Reporter Photo/Jon Goering)

By DANIEL PORTER / Staff Writer
COLUMBIANA — The Columbiana 6-and-under Invitational tournament saw Calera face off with neighbor Clanton in the championship game June 3.
Calera jumped out early, but Clanton quickly came back and made it a close game before the all-stars from southern Shelby County ran away with a 23-8 victory.
In the third at bat Calera started to show their strength and slowly began pulling away starting with Steele Armstrong’s opening RBI. In the same at bat, Ben Graham broke the game open as he scooted around the bases for an inside the park three-run homerun.
Clanton put runs on the board in their turn, but never could quite make it close. Josh Preston started Calera’s next rally with a leadoff hit. Calera got contributions from everyone as Mason McMillan came off the bench as a pinch hitter recording a hit and later coming around and scoring off the batting of his teammates.
It was clear before the final out was recorded who would take home the championship with Calera rolling to victory.
Both teams lined up along the base lines after the game to receive their team trophies, Clanton with the runner up trophy and Calera grabbing the champion’s trophy.
After celebrating with his team, Calera head coach Jeremy Armstrong said he was “extremely proud” of his players.
“They worked so hard,” said Armstrong, “and came out here and responded.”