‘Til death do us part

Caldwell said he and the funeral home staff take time together to talk about loss to “cope with sadness,” he said.

“I look at it as a mission,” he said. “To cope with it, you have to go through the good memories the families give you. If you sit and dwell on it, it’d bring us all down.”

Gilliland, Loveless and Burdett said even after years in the profession, they still need time to cope with certain funerals.

“Little children get to all funeral directors,” Gilliland said.

“It breaks my heart every time,” Loveless said. “But with babies and children – whew!

“You’re there to add structure. If you break down, you can’t provide structure,” she added. “With babies, I won’t say I don’t break down after they leave.”

“As long as you don’t let emotions handle you, as long as you’re sincere, you help someone because they need help and are sincere about it,” he said.

TRENDS OF THE BUSINESS

“People are going to more and more cremations. A lot of local cemeteries are full,” Gilliland said. “Being cremated, the family can do anything with the remains.”

Caldwell said cremation leads to more options, and can be thousands of dollars cheaper than a traditional funeral. 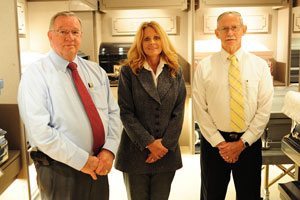 Gilliland said one of the biggest changes he has seen in the funeral business is the one-day service, where a visitation, service and interment occur on the same day. Caldwell said the same.

“It used to be, you could count on a nice visitation and the service the next day,” Caldwell said. “Now, you see it more on the same day. It’s the expense and you don’t want to prolong it.”

By DREW GRANTHUM / The Clanton Advertiser In a world where up-to-the minute information is available at the touch of... read more