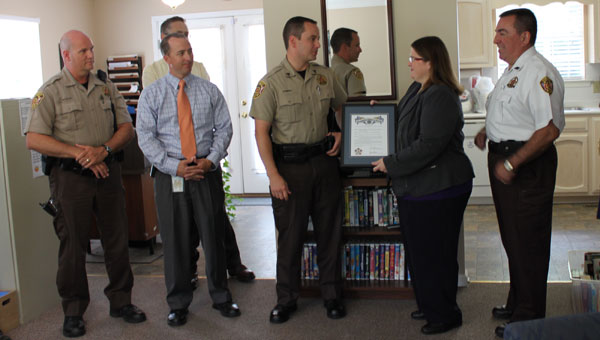 COLUMBIANA – The Shelby County Fraternal Order of Police announced its decision to support Owens House as its local philanthropy.

On a statewide level, the FOP supports Alabama Easter Seals as its philanthropy, but new leadership in Shelby County’s FOP decided to support a local organization.

“We have first-hand contact with Owens House,” FOP President Clay Hammac said. “We unanimously decided to dedicate our efforts on a local level at Owens House.”

Founded in 1993 by the Shelby County district attorney’s office, Owens House, which is located in Columbiana, provides professional counseling for children victimized by sexual abuse or severe physical abuse.

“We plan to use the venue as a way to spotlight Owens House,” Hammac said.

Cindy Greer, executive director of Owens House, said she is excited about the new partnership.

“We depend on community support in order to serve victims,” she said.

Greer, who has been the director for three years, said there are 29 centers similar to Owens House across Alabama, but only one in Shelby County.

“This is our public display of pledging support to Owens House,” Hammac said. “We want to let them know we’re big fans of what they do here.

“What a great resource for our community,” he added.