Surprise leaders after Tradition first round 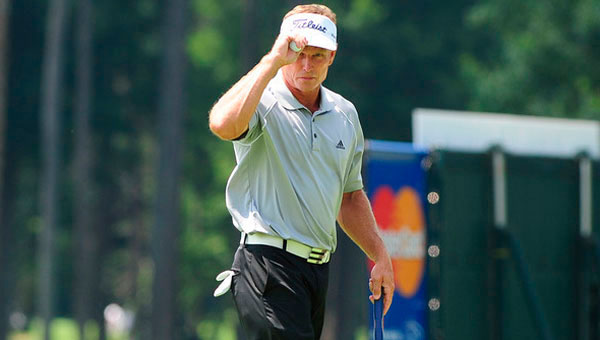 Bill Glasson, a Stillwater, Okla. native, tips his hat in appreciation of the crowd's support after making a putt for birdie on the 18th green June 7 at Shoal Creek in the first round of the PGA Champions Tour's 2012 Regions Tradition. (Reporter Photo/Jon Goering)

SHOAL CREEK — A darkhorse candidate and a recent Regions Charity Classic winner share the top spot on the leaderboard June 7 following the first round of the PGA Champions Tour’s 2012 Regions Tradition at Shoal Creek.

Bill Glasson, who hasn’t won a professional tournament since 1997, and Dan Forsman, who captured the final Regions Charity Classic event in 2010 at Robert Trent Jones Golf Trail’s Ross Bridge in Hoover, head into the second round of the major championship with a one-stroke lead after each carded a 6-under 66 in the opening round.

Glasson, who hasn’t won a professional tournament since 1997 and previously hadn’t led the field after any round in a PGA Champions Tour event, didn’t need to look any further than consecutive holes on the back nine to sum up his opening round.

“All those things are kind of unexpected,” said Glasson, a Stillwater, Okla. native. “I was just kind of cruising around. I had a lot of little victories, if you can call it that.”

All of Glasson’s “little victories” added up to a bogey-free 6-under par 66 in the opening round.

Glasson was the first golfer to take a tee shot in the opening round and his lead held up against the remainder of the field throughout the afternoon until Forsman tracked him down late in the day.

Glasson, who went off at 7:40 a.m., played with Fulton Allem in the only two-man grouping in the field and finished his round in just more than three hours.

“My ball striking overall was pretty good,” said Glasson, who is currently 22nd in Charles Schwab Cup standings and is looking for his first tournament win as a professional since 1997 when he won the Las Vegas Invitational on the PGA Tour.

Forsman’s most recent win isn’t quite so distant, with the Provo, Utah resident’s resume including a victory in 2010 at the Regions Charity Classic.

Forsman, who is ninth in Charles Schwab Cup standings and already owns one tournament victory this season, got on a hot streak early on the back nine with four consecutive birdies to join Glasson at the top of the leaderboard.

Forsman said the key to his success was finding his glove, which he lost on the turn from the front nine to the back nine before a marshal tracked it down for him before the 11th hole.

“It was like I had found a jewel of mine that I lost,” Forsman said. “I went out and birdied the next four holes.”

Forsman said he needs to carry the momentum from his opening round into Friday’s round.

“It’s a game of confidence,” Forsman said. “You’ve got to have confidence on a course like this.”

Fred Funk, a Ponte Vedra Beach, Fla. native, is currently third after posting a 5-under par 67 in the opening round. German Bernhard Langer is in fourth place after carding a 4-under par 68 in the first round.

Tom Lehman, the reigning Regions Tradition and Charles Schwab Cup champion out of Scottsdale, Ariz., currently sits in a four-way tie for fifth overall after posting a 3-under par 69 in the opening round. Lehman is currently tied with Brad Bryant, Russ Cochran and Bruce Fleisher.

Lehman recorded four birdies through his first eight holes, but a double bogey on hole No. 9, a par 4, and back-to-back bogeys on the back nine kept him from making a run at Glasson.

Lehman felt his round could have been worse if not for a few good shots mixed in, including a nice approach shot and a three-foot putt for birdie on hole No. 10, one hole after his double bogey.

“It was a bit erratic,” said Lehman, who played with Fred Couples and Jay Haas and had the biggest group of followers on day one. “I kind of got away with a few funny-feeling swings. It was a good finish after kind of stumbling.”

Glasson, who played as a sponsor’s exemption in the tournament in 2011, finished in a two-way tie for 58th overall with an 11-over par 299 last year. Glasson, who had a string of back and neck surgeries a couple of years ago, said he’s feeling much better this year.

“My scores are more of an indicator of how I feel,” Glasson said, “not how I’m playing.”

Despite his low score in the opening round, Glasson said he isn’t feeling overconfident heading into the second round.

“My philosophy is I need all those birdies for the impending bogeys I’m about to make,” Glasson joked.

Lehman, who said his first round didn’t feel much different than his opening round a year ago, will likely continue to put pressure on Glasson.

“It seems to me the course played very similar,” Lehman said.

Steve Lowery, a Greystone resident and the only local golfer in the field, carded a 4-over par 76 in the opening round and is tied for 61st overall. Lowery, who played golf collegiately at the University of Alabama, had two birdies on the front nine but a double bogey on hole No. 16, a par 3, and a bogey on the final hole, a par 4, cost him a couple of strokes late in his round.

Jerry Pate, a former University of Alabama golfer and a Shoal Creek member, also finished with a 4-over par 76 in the opening round after earning a spot in the tournament as a sponsor’s exemption. Pate, who is tied for 61st overall, makes his home in Pensacola, Fla.