Neel sews service to others 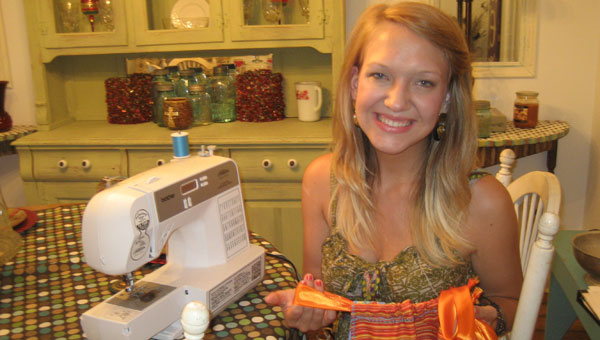 Pelham resident Hannah Neel finishes off one of the last dresses for her sewing service project. (contributed)

“My mom would hear my sewing machine running late at night-and she would know I’d had a tough day,” said 20-year-old Hannah Neel. “Sewing is my therapy.”

Sewing recently became Neel’s service work. Raised by a teacher and a nurse, service comes naturally to the Neel family. However, Neel credits her artistic sister for her latest project.

Older sister, Emily Neel, met Bullen Timo when these two artists were in neighboring booths at an art exhibition. Timo shared his story of being orphaned in Africa, raised by a minister grandfather and coming to this country under the sponsorship of Four Corners Ministries to attend college.

Timo also told his new artist pal that he was seeking a coordinator for a dress drive for his village. When Neel told Timo that her younger sister was a seamstress, Timo said, “Please ask your sister to pray about this.”

Why pillow cases? Neel needed a pattern for the littlest girls’ dresses, so she and her mom, Pelham High School teacher Barbara Neel, constructed one using ribbon and either fabric or a pillow case. The plan allows for size adjustment with the ribbon and an A-line design allows the dresses to become shirts as children grow.

“Mom made the first dresses so I could see examples. I made the next 70,” Neel said. “The village hopes to build an orphanage soon. I hope to see that.”

Although it’s impossible for Hannah Neel to visit Africa now, she shipped her labor of love to Timo’s village in early June. Neel’s career plans include teaching middle school home arts. Hannah Neel is an amazing role model who shares her talents-and her joy through service.