Seniors dance the night away in Calera 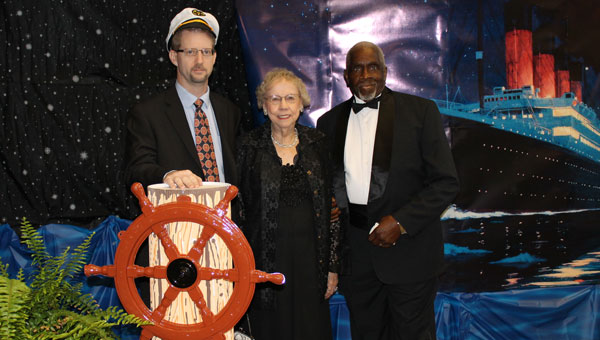 Lifeguard Ambulance's Doug Tisdale stood in as "captain" and took photos with all guests arriving to the senior prom. (Contributed)

CALERA – Seniors danced the night away in a Titanic-themed ballroom at a senior prom held at Calera First United Methodist Church.

“To see 93 year old seniors out there dancing. It was just great,” said Mara Tierce, community relations director of Southern Care in Clanton. “We had a few assisted living facilities bring some of their residents. Every facility designated a king and queen, or at least a queen.”

As seniors, dressed in their best, came into the prom, they took their picture with the “captain,” or Alabaster resident Doug Tisdale, regional executive of Lifeguard Ambulance.

“I got to have my picture taken with a whole lot of beautiful women,” he said, laughing. “We even had our COO dancing with one of the queens from one of the senior centers. “That’s one good thing about our group of folks, health car in general, we like to be able to help folks and have fun they haven’t had in a long time,” he added. “We just had a good time.”

Leadership from Southern Care and the Calera Senior Center put the even together with the help of sponsors across the area.

John Pope of Over the Top DJ volunteered to provide music for the dance, and Darlene’s Discount and Deli provided food.

“People generally are kind, and if they can give they absolutely want to give,” Tierce said.

“They just know how much I like to do those special things,” Tisdale said. “We jumped in and did everything we could to make it happen. Our staff at Lifeguard, we wound up having 13 folks. We had the COO, director of communications, managers, then staff-level folks. It was a good cross-section of the company to show up to help.”

“We had one queen that was 93. We had a couple crowned king and queen from the Alabaster Senior Center,” Tierce said. “It was just sweet, so sweet.”