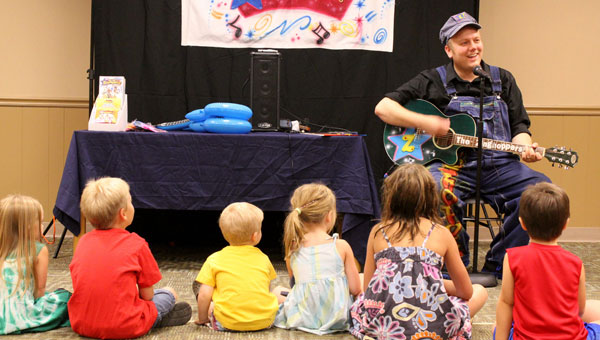 "Conductor Jack" of The Zinghoppers leads children in a song at the Pelham Public Library. (Reporter photo/Katie McDowell)

PELHAM — The Pelham Public Library was anything but quiet on the morning of June 19.

Clapping, singing and laughing rang out in the entertainment room during a program by The Zinghoppers, a Nashville-based entertainment group.

Led by “Conductor” Jack Norton, the children, who ranged from toddlers to school age, sang classic songs, including “I’ve Been Working on the Railroad” and “If You’re Happy and You Know It.”

The highlight of the program was the appearance of Conductor Jack’s friend.

After asking the children to guess what kind of animal his friend was, Conductor Jack introduced “Coconuts the Kangaroo” and asked her to lead the group in another song.

Children’s librarian Mary Campbell said the program, which appears on Tennessee Public Television and has won an Emmy, is part of the library’s Smart Investing @ Your Library initiative.

“He’s going to talk a little bit about money,” she said. “That’s part of our ‘Financial Fun for the Young” (program).”

The initiative is funded by a grant from the Financial Industry Regulatory Authority and the American Library Association. The program offers print and online resources to help people make investment decisions.

“In the summer, we have a performance every Tuesday in June and July,” she said. “We basically have one program every day we’re open in the summer. We do craft time, story time.”