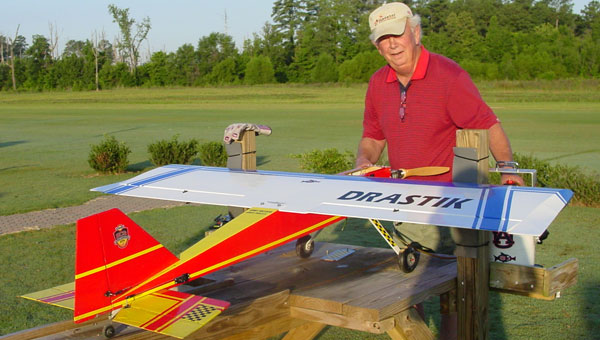 I knew he was retired, couldn’t imagine what he was up to, and when curiosity got the best of me, I asked. He invited me to follow him one morning, so I did.

We drove up to a beautiful airfield in Limestone Park, where we met several other members of the Alabaster Radio Control Association and where the puzzle of what Jonny does was solved.

He and the others, mostly retired, have a great time for four or five hours building and flying remote-controlled planes, and then all going over to Whataburger for breakfast and to talk about flying.

As a youngster, Jonny loved building model planes, and that interest has not lessened with the new improved kits and motors. His trailer is equipped for the singular purpose of maintaining his collection of planes.

On the morning I visited the airfield, I watched him fly a beautiful, gas-powered plane with a 6-foot wingspan and gas engine, called an Ultra Stick. It, and the planes flown by his friends, soared above the field in exciting circles, flips, dips, and swirls; beautiful to watch.

“A friend got me interested in flying the remote planes,” said Jonny, “and in joining the club. I love the idea of flying, but the real reason I got hooked is the people who are involved; they are absolutely outstanding. Most of us have flown regular planes, so we have the same interest. The remote flying is a wonderful sport with a great fellowship.”

Jonny retired from the busy life of a contractor and steel representative nine years ago; he had built houses, buildings and plants in many parts of the world. He grew up in Birmingham and earned a degree in math and business management at Samford. He, and Barbara have lived in Montevallo since 1982, and are the parents of five and grandparents of five.