Hundreds gather at Caritas for prayer 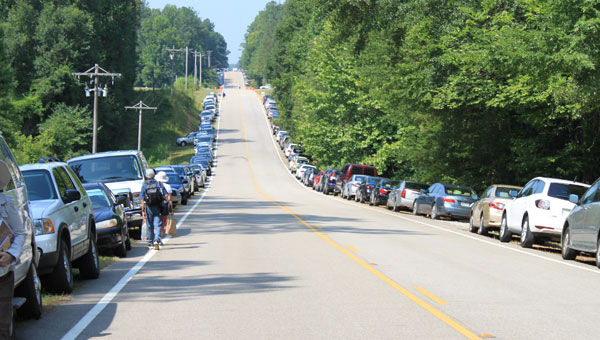 STERRETT – Hundreds gathered at Caritas of Birmingham in Sterrett for five days of prayer July 1-5.

“Our nation is in desperate need right now,” McDonald said. “We need our nation healed, but we need God in our own hearts and in our families first.”

The five days of prayer bring visitors from across the United States to spend time in prayer and hear from Marija Lunetti, who claims to have visions of the Virgin Mary.

Lunetti first visited Birmingham in 1988, and she said the Virgin Mary appeared to her at Caritas. Lunetti is a visionary from Medjugorje, a town located in western Bosnia and Herzegovina. She reportedly first saw the Virgin Mary in 1981 as a child.

“Marija has seen apparitions every day in the bedroom of apparitions,” McDonald said.

McDonald said the attitude of this year’s visitors differs from previous years.

“The frame of mind is different because of what is happening in our nation with the attack on religious liberty,” she said. “There’s a seriousness and emphasis on prayer and sacrifice.”

Everyone is invited to visit Caritas during the days of prayer, McDonald said.

“It’s a grace to be present,” she said. “Even if you don’t believe, you’re with a group of prayerful people. It’s a beautiful time for people to be together and pray.”

LaDonna Pate, who lives in Gainesville, Va., said her family didn’t understand why she made a trip to Alabama by herself for the five days of prayer. She said she plans on making a pilgrimage to Mdejugorje someday.

Kathy Mazza and Mary Castila traveled from Atlanta for the five-day event.

“We were just so intrigued that the blessed mother presents herself,” Mazza said. “We grabbed a couple of friends and made our pilgrimage.

“She (the Virgin Mary) doesn’t come every year, so we didn’t know if she would stop or if we’d miss her,” she added. “We dropped everything and came.”