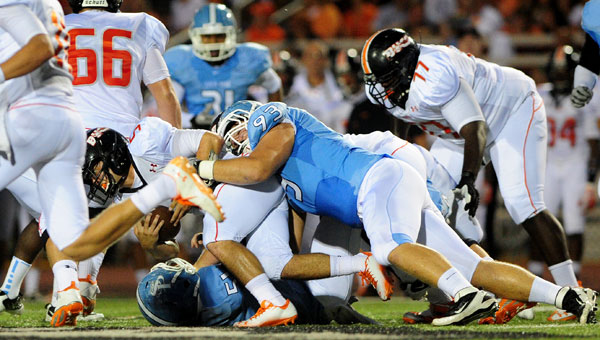 The opportunity to help build a program from the ground up played the biggest role in Chaffin’s decision to verbally commit July 9 to play college football at the University of South Alabama.

Chaffin saw a chance to make a historical impact for the Jaguars, who play a full schedule for the first time this fall. South Alabama will be eligible to capture the Sun Belt Conference championship and play in a bowl game for the first time in Chaffin’s freshman season in 2013.

“I just want to be part of the (program’s) history,” Chaffin said. “I just loved the campus. It is really nice.”

“They’re just great people,” Chaffin said. “I feel like maybe I can get in there and play early.”

Chaffin said he’s relieved to have his college decision out of the way before fall practice begins at Spain Park. The Jaguars’ defensive leader has high expectations for his team this fall.

“Most definitely, recruiting is over for me,” Chaffin said. “I want to win a state championship. That’s what I’m focused on.”