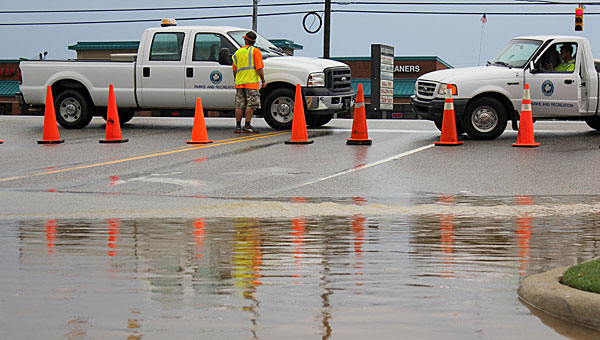 Heavy morning rains on July 18 brought as much as four feet of flooding in some parts of Alabaster, according to city officials.

Several homes, particularly near Buck Creek, were damaged by the flood waters, and city officials were forced to close portions of Sixth Avenue Northwest and First Avenue West as a downpour drenched the city throughout the morning.

“There are cars floating around, and some houses are flooded right now,” Frings said at about 1 p.m., noting areas near Buck Creek Park, the Alabaster Church of God and along Thompson Road were hardest-hit by the flooding.

Rains also reflooded the Albert L. Scott Library and the Thompson High School weight and locker rooms, both of which flooded after heavy rainfall on July 9.

The library flooded shortly after city officials celebrated the grand opening of a new expansion to the children’s section. However, the new wing was not heavily damaged during the flood, Frings said.

“It mainly flooded the areas where we had to replace the carpet after it flooded last week,” Frings said.

The city has opened the Alabaster Senior Center as a temporary shelter for anyone whose house was damaged during the flooding.

For an up-to-date listing of flood-related road closings, visit Facebook.com/alabasterpolice.

The Alabama Health Planning and Development Agency’s Certificate of Need board approved a plan for HealthSouth to build a new,... read more