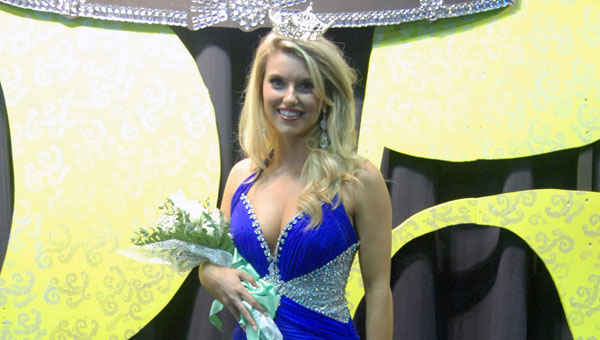 Brooks was not the only person to take home a crown on Friday at Shelby County High School in Columbiana. Sydney Slaughter was crowned the Miss Shelby County Outstanding Teen 2013.

In honor of Miss Shelby County’s 25th anniversary and the joint pageants, the directors pulled out all the stops this year. Many former Miss Shelby County winners attended both the pageant and a reception held in their honor beforehand.

Brooks, a 22-year Birmingham resident, beat out eight other contestants to secure the title. She also won the talent portion of the contest with her jazz routine to Bette Midler’s “Big Noise.” 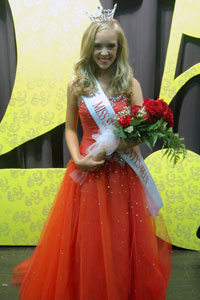 Brooks’ platform is called “Dare to Discuss: AIDS Awareness and Advocacy. Brooks said she developed her platform after she began volunteering at an AIDS outreach program in Birmingham when she was 14.

“(Dare to Discuss) is an educational program that focuses on HIV but with a younger audience,” she said. “I’ve learned that stereotyping about what kind of person might get HIV is completely wrong and silly.”

Brooks said she is looking forward to representing Shelby County over the following year and competing in the Miss Alabama pageant for the fifth time next summer.

“I was the first in my family to attend college, that is because of the Miss Alabama system and preliminaries like Miss Shelby County,” she said.

Brooks, who recently received her bachelor’s degree from the University of North Alabama, currently works in public relations for Style Advertising in Birmingham and plans to return to school to study for a master’s degree in public administration.

Haley Mims, a former Miss Shelby County and a choral teacher at Vincent High School, served as the director of the Miss Shelby County Outstanding Teen pageant. Mims said she felt Slaughter will be a “wonderful representative” of the county this year.

“The teen portion of the pageant was overwhelmingly full of talented and beautiful girls,” Mims said. “I believe it was a great addition to the wonderful Miss Shelby County pageant.”

Adaptive Aquatics, a Wilsonville nonprofit that serves disabled children, adults and military veterans, was chosen as a finalist to win... read more