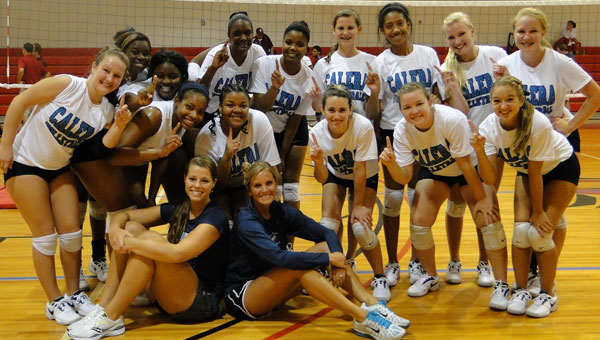 The 2012 Calera High School volleyball team started the season with a win at a summer competition at the University of West Alabama. (contributed)

The Calera High School volleyball team traveled to Livingston on Saturday, July 14, to participate in a summer competition at the University of West Alabama. The team competed against five teams from two states, winning the tournament with a 6-0 finish.

“Winning is always rewarding, but this tournament was more about finding our strengths and weaknesses,” said head coach Amanda Lewis.

Lewis began her coaching career at Calera in 2008. Since that time she has not only expanded the program, but has taken the team further in postseason than any other team in its history. The 2008 team made it to the regional tournament. The 2009 and 2010 teams received second place in regional and advanced to the top 16 Alabama sub-state match. In 2011, the volleyball team won the area, second in region, the sub-state match and advanced to the elite 8 state championship held at the Pelham Civic Complex.

The Eagles have added height to the program this year with Shelby County transfer Keyanna Gayden, as well as Calera’s Akia Harris in the middle.  A transfer from Florida, Faith Graham, will fill the shoes of 2012 Calera graduate setter Kellie Rasmussen.

“We will continue to work on our areas of improvement in order to be competitive,” Lewis said.

“Coach Lewis has built this team the old fashion way with hard work and dedication,” Bishop said. “The girls believe in themselves and trust each other. Their games are enjoyable to watch and we look forward to big things in the fall season.”

The Eagles 2012 season opens with a tri-match against state runner-up Alexandria High School and Oxford High School on Aug. 23. The match will be held at Alexandrai High School. Game times are 5 p.m. and 6 p.m.