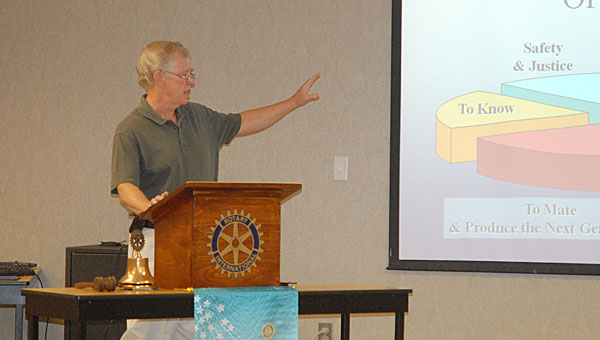 During the meeting, Dr. Daniel Thompson said studies have linked strong marriages with several desirable community aspects, such as school performance, reduced drug use and a better economy.

From 1950 to 2000, the divorce rate and the number of children born outside wedlock in America increased drastically, Thompson said.

In 2008, the percent of American children who reached 17 years old in a household with an intact marriage was 45.4 percent. In Alabama, the percentage was lower than 40 percent, he said.

“This is not a talk about morality or religion. This is objective information about the cost to society because of the breakup of a family,” Thompson said. “What happens with a mother-father relationship eventually affects society as a whole.”

“An intact family provides for more likelihood that a family will do well economically, that the individual will do well and that society as a whole will do well,” Thompson said. Thompson also said families who regularly attend church together are linked with higher GPAs among children, fewer sexual partners and a lower rate of childhood runaways.

“When you put the factors together, people in intact families who attend church add together to produce better societal factors,” Thompson said. “No matter where you are, an intact family relationship is important for a strong society.”