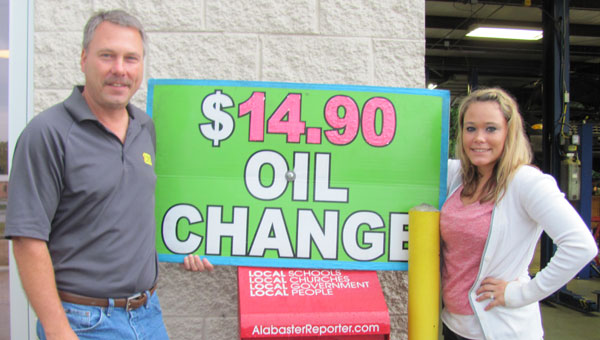 “I was one of the first babies born at Shelby Memorial Hospital back in 1962 when they first started delivering babies. I did so well they decided to keep it up,” joked Rick Martin during our recent chat.

Educated in Thompson schools in the early ‘80s, Rick recalls his favorite childhood memory as playing little league baseball for Robert McCartney. His first jobs out of high school were with Oak Mountain State Park and Stubbs Foundry.

By 1994 Martin had set his course. After a stint working with his dad in the family wrought iron business, he decided to try a different path. By taking a clerk job with Precision Oil and Lube, he quickly found his passion: Serving people who depend on their cars to transport them safely and being a dependable worker with a “get it done right” attitude.

Martin set himself a business goal. His Precision Lube locations are now in Alabaster, Pelham, Homewood and Forestdale.

An additional location on Valley Avenue is being renovated after recent storm damage. He is an operating partner of all locations. Recently involved in business networking through M&F Bank, Martin has big plans for not only his business but for his personal life.

“One night I walked out of a bar and thought to myself that I had better things to do and I just quit all that uselessness,” said Martin. Now a big believer and worker in the Celebrate Recovery Program at Kingwood Church he said, “Recovery is not just alcohol and drugs, it’s anything that separates you from Christ.”

Martin was very talkative about helping his fellow man. He is father to Katie Martin Akl, who now is the go-to gal at his Alabaster location, and also is father to son, Zach, 14, and daughter Lindsay, age 12.

Friendly, cheerful, hardworking, family man and Christian who gives all the credit to God, Rick Martin seems to be a straight shooter.