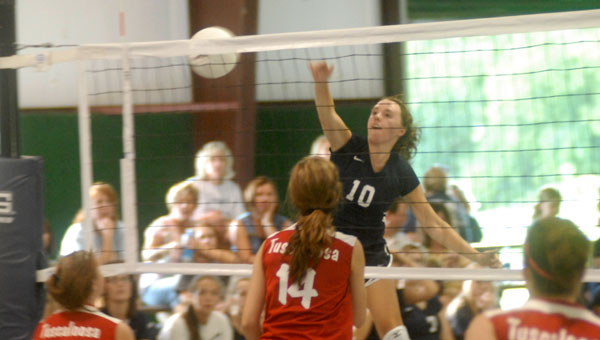 Evangel Christian School junior Elizabeth Ragland rises for an attack at the net in the Lightning's 25-23, 25-16, 25-21 win over Tuscaloosa Christian in the school's new athletic facility Aug. 13. (Reporter Photo/Wesley Hallman)

MONTEVALLO — Evangel Christian School junior Kierson McGriff and her volleyball teammates have played “home” matches across central Alabama the past few seasons on courts decorated in colors that cover the spectrum of the rainbow.

McGriff and the Lightning finally held a true home-court advantage in a season opening match Aug. 13 against visiting Tuscaloosa Christian, taking the newly installed silver and blue platform court at the school’s newly acquired athletic facility off Alabama 119 in Montevallo.

With several Evangel Christian parents and students supporting the team from a few feet behind the home team’s bench, the three-time defending Alabama Christian Sports Conference champions knocked off Tuscaloosa Christian 25-23, 25-16, 25-21 in the season opener.

McGriff said having several family members and friends in attendance gave the Lightning an added confidence in the home match.

“We have so much energy here,” McGriff said. “We feel a lot stronger. We finally have our own home.”

The Lightning closed out a 25-23 win in the opening game despite a 5-0 run by Tuscaloosa Christian late in the game.

McGriff pounded the game-clinching kill in Evangel Christian’s 25-16 victory in the second game. A kill by Elizabeth Ragland clinched the match for the Lightning in a 25-21 win in the third game.

Evangel Christian coach Caprice Lawrence said the first home match for her team in a building that will also serve as a home facility for the school’s basketball teams, as well as a practice facility for the football and baseball teams, was about much more than just the volleyball program.

Lawrence pointed out the presence of several members of the football team, who watched the volleyball match for a few minutes before heading outdoors for a team practice.

“It’s like having a homecoming,” Lawrence said. “To me, it’s like our whole family is at one place. It’s home for our school. We’re just really blessed.”

“This is just the final thing to make it feel complete,” McGriff said.