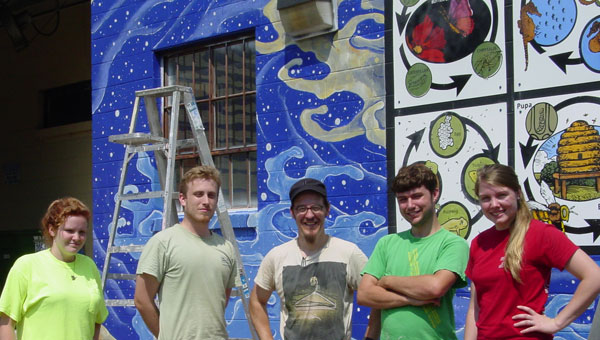 University of Montevallo students with the mural. (contributed)

Those folks lately riding along Shelby County 12, or Overland Road, have enjoyed watching the work-in-progress of a colorful mural on the walls of the recycling center. Like the proverbial cat, I was curious, so I went to find the who, what and why.

First the who: On a hot afternoon I found the hardworking artists, University of Montevallo students Brittany Levan, Austin Self, Michael Burchette, Sarah Wade, and Natalie Roig, led by Associate Professor Collin Williams. They had joined a new class called community art and have worked at this project four hours every day in the extreme heat for four weeks. What a phenomenal example of endurance and accomplishment!

And the why: Williams explained the current recycling center is a significant upgrade from the previous site on campus with greater capacity, but it needed to look more appealing. The city approached him to do an art project that would raise the visibility of the center and make the site more attractive. They thought this would make the community take greater pride in the site and increase participation in the recycling program.

Now what: “The mural includes four 36-inch panels,” said Williams, “on the theme of cycles in nature. Recycling, as a practice, mirrors numerous cycles in nature in the sense that it is cyclical and continues to use materials repeatedly. This is most readily apparent in the water cycle or the soil cycle, but is a fundamental pattern in nature. These panels are homage to the fact that when we recycle, we not only conserve resources, we mirror natural patterns of reuse, recycling and sustainability.” 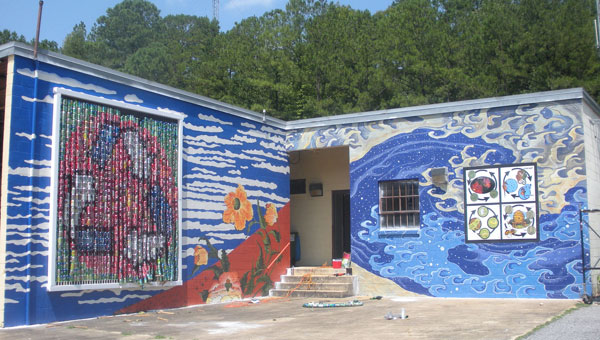 A view of the completed mural at the Montevallo Recycling Center. (contributed)

The materials used in the mural were weather-enduring paints and the “curtain of cans,” cleverly arranged to illustrate the recycle symbol, was made, of course, entirely of recycled cans.

This is a three-year plan; next year, the mural will spread to the large wall to the right of the mural walls just completed. The following year, phase three will include a garden of native plants, sculpture and a learning garden for children.