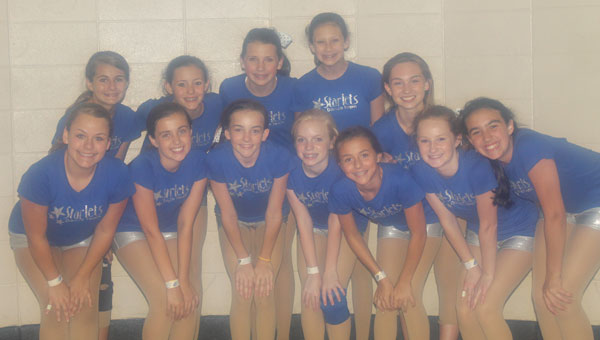 The Chelsea Middle School Starlets will compete in nationals in January. (Contributed)

CHELSEA – The Chelsea Middle School Starlets kicked off another school year by winning a number of awards at the Universal Dance Association camp this summer.

The girls try out for the dance team in March, practice three days a week all year and perform during football and basketball games.

Middle schoolers try out in the spring of their sixth-grade year to perform in their seventh and eighth grade years.

In addition to dancing at athletic events, head coach Michelle Nivens, a Spanish teacher at CHMS, said the 12 dancers participate in service projects.

“This year, I’ve decided to branch out and do more,” Nivens said.

Captain Lauren Mims and co-captain Emily Acton, both eighth graders, have been on the team for two years.

“Camp is fun,” Acton said. “It’s where you get to know your team, but it is stressful at parts.”

Nivens said the girls don’t have to have dance experience before trying out for the Starlets.

“I’ve had a captain who didn’t have any experience, but improved so much she made captain the next year,” Nivens said. “We teach them all the technique they need to know.”

According to Nivens, the weeklong camp held at the University of Alabama at Birmingham was “amazing.”

“It’s so much fun, and they get to bond,” Nivens said. “It gives us everything we need for the rest of the year.”

The Starlets competed on the first night of camp, and by the end of camp took home four trophies, including first place for home routine, the Universal Dance Association full-out award, the 110 percent leadership award and the coach’s leadership award.

Due to their achievements, the dance team is going to compete on the national level in January, Nivens said.

Four of the girls were named All-American, and will perform in a Thanksgiving parade at Disney World. Acton and Mims were two of the dancers awarded the title of All-American.

“It’s a lot of fun to get to perform at games, and it keeps you in shape,” said Mims, who has been a gymnast for 10 years.

By KATIE MCDOWELL/Lifestyles Editor The projected Shelby County School System 2012-2013 budget is $303 million. The board heard the projected... read more