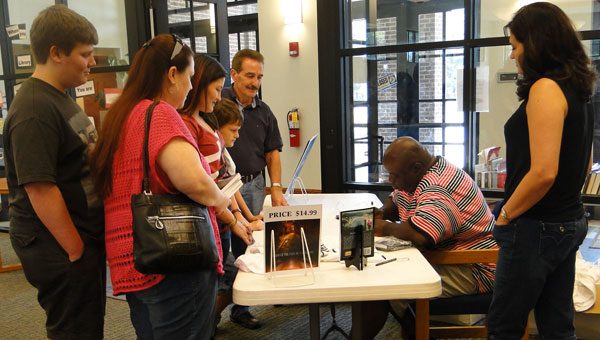 Success in life is often the result of adversity experienced in childhood. This is true of Byron De’Vinner, author of “Through the Eyes of a Survivor.”

De’Vinner was at Roy Downs Calera Public Library on Aug. 11 for a book signing.

De’Vinner was born in Calera in 1969, raised by his great-great-grandmother, Katie Gaiters, and overcame many childhood obstacles to become a successful man.

At the age of 6, he suffered second and third degree burns when a barrel exploded in his face.

“The doctors told my grandmother I would never see again, and when he said that I opened my eyes,” De’Vinner said. “When he left the room I told her I could see. She held up fingers and I told her how many.”

By the age of 9, De’Vinner worked four hours a day to help his grandmother pay bills, learning early in life nothing would be given to him. He played football at Calera High School and by his junior year was recruited by several colleges. He accepted a scholarship from Alabama State University in order to stay close to Gaiters. He played one season, then transferred to UAB to complete his playing career due to her health.

Despite a busy schedule, De’Vinner took every opportunity for community involvement, a passion developed from his grandmother and people who helped him.

“The Gilliam and Davis (Roz and Tom) families went above and beyond to look after me,” he said. “I give back to younger people now because of how blessed I was to have them in my life.”

After college, Byron spent five years working in drug reinforcement (a way to help end drug addiction). He lost his grandmother in 1999 and five years later founded the De’Vinner Foundation, a non-profit organization that reaches out to America’s youth.

De’Vinner never considered where he was born or his circumstances. He changed himself and in essence changed the world.