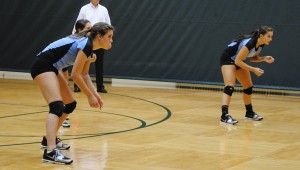 NORTH SHELBY – It took a quick three sets for defending Class 6A, Area 12 champion Mountain Brook to dispose of the Spain Park Jaguars in a home volleyball match Tuesday evening.

The Jaguars struggled to get many rallies going throughout the match; starting the first game with a 3-0 lead, the longest points streak came for Spain Park as they stalled game point in the second set six straight times.

“We had a lot of points from behind the service line,” Mountain Brook coach Haven O’Quinn said. “We kept [Spain Park] out of their system of offense because of our serving.”

The two teams fought a back-and-forth battle to begin the match, coming to a 9-9 tie before the Spartans dashed out to a 15-10 lead.

Spain Park remained competitive in the first set until, leading 20-16, the Spartans took a 5-0 run to end the set.  Greer Cunningham led the way for Mountain Brook, serving the team’s last five points.

In the second game the Jaguars held a 9-8 lead before Jordan Hughes led a seven-point rally for the Spartans.

After extending the lead to 18-12, a six-point streak put Mountain Brook at set point.  Jordan Nakayama led a six-point rally for the Jaguars to keep their chances alive in the set but it wasn’t enough to completely overcome the Spartans.

“There were a few rallies that we played as a team,” Spain Park coach Paula Dill said.  “But we did not perform our game plan like we talked about and worked on.”

Facing a sweep, the Jaguars scored the first two points of the third set with a pair of Nakayama service aces.

The Spartans took the next four points and had a 10-7 lead after another four-point run.  From there, Mountain Brook took control of the game, outscoring Spain Park 15-5 to finish the match.

Cunningham led all players offensively with 16 kills for the Spartans.  “Greer stood out on the outside with some nice big swings,” O’Quinn said.

Up next for Spain Park is a home contest against Prattville on Thursday.

“My kids are a great team but we were not consistent with working as a team and fighting when we were down,” Dill said. “[In practice] we will focus on team morale and ball control.  I am excited about the remainder of the season but we have work to do.”