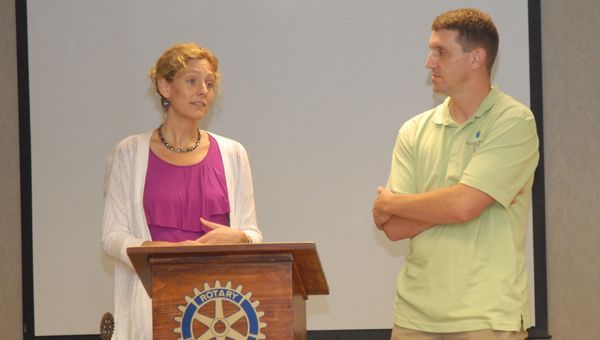 A local family operating a center for those affected by conflicts in eastern Africa has rapidly grown their student enrollment from a little over 100 students to more than 300 over the past few years, they told members of the Alabaster-Pelham Rotary Club during a Sept. 6 luncheon.

During the luncheon, Alabaster native Jade Acker and his wife, Shelah, said the family has been conducting mission work in Africa since 2004, and worked to open the Refuge and Hope International center in Kampala, Uganda about four years ago.

The family recently returned to Birmingham, and will spend the next few months at the Shades Crest Baptist Church mission house before returning to Uganda in December.

Through the Refuge and Hope International Center, the Ackers work to provide Bible study sessions, sewing classes and math and other educational lessons for refugees fleeing the region’s many conflicts.

“Uganda has some of the most open refugee laws in Africa,” Jade Acker said. “They don’t have to live in camps, they can live in the cities.”

The Ackers said many refugees are fleeing conflicts in countries such as the Congo, Rwanda and Somalia, and often “struggle just to survive” after leaving everything behind at their former homes.

Shelah Acker said English as a second language classes are the center’s number-one demand, and said the center, which is in a four-bedroom house, is staffed with a mixture of American and African volunteers.

The Ackers said the center is funded by individual and church donors, and said the ministry is always looking for new donors.

“All money given goes straight to the ministry,” Jade Acker said, noting the Cooperative Baptist Fellowship helps to fund the Ackers’ living expenses.

Refuge and Hope International will have a booth at the Bluff Park Art Show in Hoover on Oct. 6 selling crafts and jewelry made by refugees at the center.

By CHRISTINE BOATWRIGHT / Staff Writer VINCENT – Two challengers in the recent Vincent municipal election have petitioned for a... read more