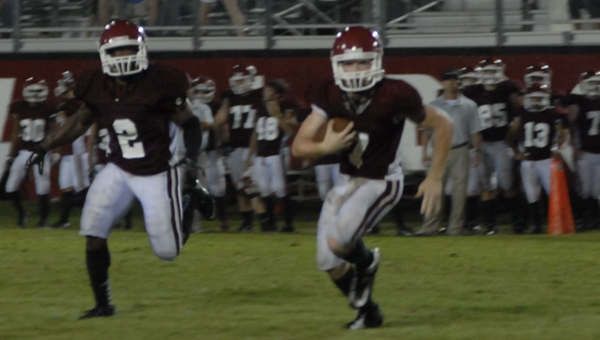 COLUMBIANA —  John Carroll Catholic School capitalized on three turnovers in the fourth quarter by Shelby County High School to pull away to a  37-15 victory.

Shelby Coach Brent Smith said it was pretty simple why his team lost.

“Turnovers and penalties beat us; that is the bottom line,” Smith said.

Junior quarterback Ty Proctor was 7-of-15 passing with 66 yards, while also rushing for 89 yards and a touchdown on 16 rushes, but threw four interceptions, three of which were returned for touchdowns.

Proctor’s rough night started early when John Carroll intercepted his pass on the first play of scrimmage and took it back for a touchdown.  John Carroll converted the two-point conversion to make the score 8-0 with 11:49 left in the opening quarter.

But Proctor would bounce back and score on an 11-yard touchdown run with 5:12 left in the first quarter. McGregor would convert the two-point conversion tying the score at 8.

Smith said he was pleased that his defense did not allow another point in the first half.

“They really couldn’t do anything,” Smith said. “But then they changed what they were doing a little bit in the second half and we had trouble adjusting to it.”

Shelby County took the lead 15-8 with 9:44 left in the game after Proctor scored on a in a 1-yard run and freshman David Watkins added the extra point.

Shelby County could not hold onto the lead for long because John Carroll scored on a long pass at the 8:28 mark and add the extra point to tie the game at 15.

On the Wildcats’ next possession, Proctor threw his second interception and one play later John Carroll scored on a long run to take the lead 22-15 after the extra point at the 4:49 mark.

At the 4:27 mark of the fourth quarter, Proctor threw another interception that was returned for a touchdown that pushed the Cavalier lead to 29-15 after the extra point.

Twenty-one seconds later at the 4:08 mark, Proctor threw another interception that was also returned for a touchdown extending the lead to 37-15 after the two-point conversion attempt.

Shelby County could not do anything on their next possession and John Carroll was able to run out the clock.