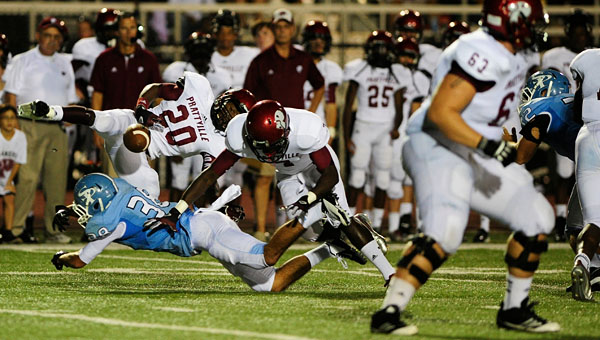 Spain Park's Zac Newton forces a fumble during a carry by Prattville's Stanley Mays during the Jaguar's victory on Sept. 7 in Hoover. (Reporter photo / Jon Goering)

The Spain Park Jaguars held the Prattville Lions to just three points in the second half to open the season at home with a 27-20 victory over the defending Class 6A champions on Friday, Sept. 7.

“It’s a really big win for us,” Spain Park head coach Chip Lindsey said on the victory. “To have the opportunity to upset the defending state champ is a big deal.

“They have a good team and I’m sure that they will be better as the year goes.”

The Lions (0-2, 0-1) held a 17-14 lead at the half after senior kicker Austin MacGinnis nailed a 50-yard field goal to end the second quarter. However, the Jaguars didn’t let MacGinnis’ kick derail them.

Spain Park (1-1, 1-0) opened the second half with a big stop on defense to give senior quarterback Nick Mullens the ball deep in his own territory. Mullens and the Spain Park offense worked the ball down the field using their high tempo short passing game. The Jaguars’ senior quarterback found Kevron McMillian for a 24-yard reception on third-and-long, then two plays later completed a 33-yard pass to Otis Harris to give Spain Park the lead, 21-17.

“I think that (the no-huddle) had something to do with it,” Lindsey said on the high tempo offense affecting the Lions’ defense. “We tried to snap it as many times as we could to wear their guys down.”

The Jaguars defense played havoc on the Prattville offense causing a fumble and picking off a Kalen Whitlow pass on back-to-back Lion drives.

Spain Park turned the interception into points on a Thomas Taylor 28-yard field goal for a 24-17 Jaguars’ lead headed into the fourth quarter.

The defense again rose to the occasion for Spain Park in the fourth quarter. After Whitlow completed a pass to Seth Knotts, a gang of Jaguars held up the receiver to allow Jacob Wolkow to strip the ball and return it to the Lions’ 25-yard line.

A Prattville personal foul penalty moved the ball to the 13-yard line and four plays later Taylor converted on a 17-yard field goal to extend the Spain Park lead to 10, 27-14 with 6:45 remaining.

The Lions’ offense found a rhythm on their sixth drive of the second half. Kamryn Pettway rushed for 38 yards to help put Prattville in position for a 33-yard field goal by MacGinnis for a 27-20 Spain Park lead with 3:23 left in the game.

The Jaguars sealed up the game by recovering the Lions’ onside kick attempt, then ran out the clock.

Spain Park was first to get on the board in the first quarter when Mullens connected on six straight passes, then found Benjamin Olinger in the end zone for a six-yard touchdown pass and a 7-0 lead.

Prattville knotted the game at 7-7 when Pettway scored on a eight yard touchdown run. Stanley Mays added a six yard tote for a score on the Lions’ next possession to give Prattville a 14-7 lead at the end of the first quarter.

The Jaguars evened the score 14-14 late in the first half when Mullens threw for his second touchdown of the game to Dalton Brown to cap a 70-yard drive.

Mullens threw for 267 yards on 23-of-43 passing with three touchdowns.

“I think that there are a lot of colleges missing the boat on him,” Lindsey said on his senior signal caller. “I say that because the things that we require for him to do in our offense are very taxing on a quarterback mentally. He handles all of that. His best years of football are ahead of him.”

Friday was the Class 6A, Region 4 opener for both squads. Spain Park will travel to Chelsea to take on the 2-0 Hornets on Friday, Sept. 14.

By MARK WINDHAM / For the Reporter Calera would take an early 7-6 lead over Dora, but Dora would run... read more