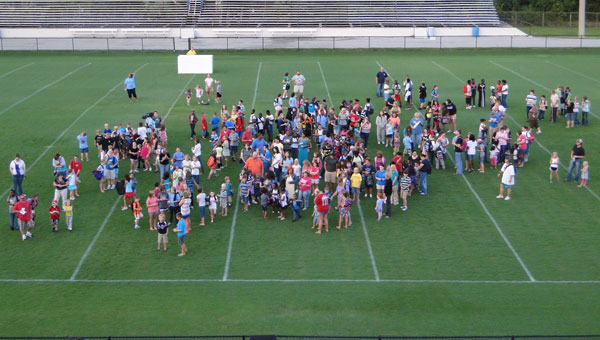 Students and parents gathered on the football field at Ricky M. Cairns Stadium during the second annual Prayer in the Park service. (contributed)

On Sunday, Aug. 19, Calera families kicked off the new school year with the second annual Prayer in the Park at Ricky M. Cairns Football Field.

Prayer in the Park is a communitywide praise and worship service coordinated by several local churches. The event started as a back-to-school backpack anointing service at Calera First United Methodist Church. Last year, other Calera churches joined in and opened the event for the whole community.

“It just started through wanting to unite our community in praying for our students and schools,” said Melinda Gibson, Calera First Children’s Ministry director. “One of the largest spiritual battlegrounds are the schools, so what better battle plan than to unite the body of Christ in Calera together to pray?”

Wendy Pierce, worship leader/director South Shelby Baptist Church and Learning Center said Prayer in the Park is a very important event for our community. “There is so much that churches can do, and as a result people will see and feel the love of Christ through these deeds,” she said.

“I know my family was blessed,” said Valerie Goebel, Calera resident and mother of three.

The Calera Chamber of Commerce recognized businesses who have contributed to its success in a luncheon held at Timberline Country... read more