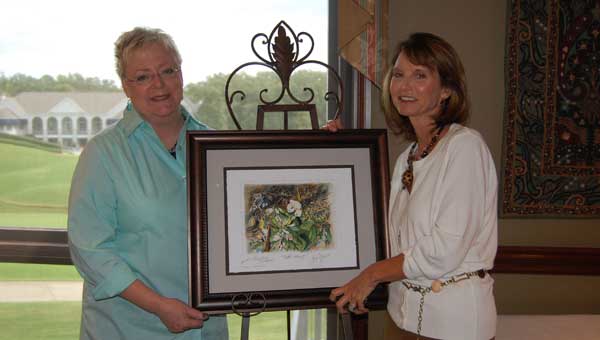 Shirley Welch and Karen Spann pose with a signed copy of the print they made to benefit the Governor's Emergency Relief Fund. (Photo by Katie McDowell.)

ABC 33/40 Meteorologist James Spann spoke to members of the Greystone Ladies Club at a Sept. 12 luncheon at the Greystone Country Club.

Spann, who was recently named Broadcaster of the Year by the National Weather Association, discussed the April 27,2011 tornadoes. Shirley Welch also spoke at the meeting about a painting she created from a photograph taken by James Spann’s wife, Karen. The Spanns and Welch are selling prints of the painting and using the profits to assist tornado victims.

On the Saturday after the tornadoes hit, Karen Spann accompanied her husband on a trip to Pleasant Grove to view the damage and assist victims. While on the trip, she took a single photo and left feeling overwhelmed by the devastation. When they returned home, Karen wrote an essay about her experience that her husband later posted on his blog.

“I took only one picture that day and that was a magnolia I found blooming in a pile of debris,” she wrote.

When Welch, who read part of Karen Spann’s essay aloud during the luncheon, found out about the photo, she knew immediately she wanted to see it.

“When I found out she had taken a picture, my spirit just leaped. I thought, ‘I have to paint that picture,’” Welch said.

The painting also includes the Bible verse John 16:33: “I have told you these things, so that you may have peace. In this world you will have trouble. But take heart! I have overcome the world!”

John Hosmer made prints of the painting, which is called “Take Heart” and the Spanns and Welch are selling prints to raise money for the Governor’s Emergency Relief Fund. The fund, which was established by Gov. Robert Bentley, was established to support the victims of the April 27, 2011 tornadoes.

James Spann said many of the victims are still struggling to recover from the disaster.

“Here we are more than a year after this and we have a humanitarian crisis,” he said.

Spann also said Alabama residents rely too heavily on tornado sirens. He suggested people use weather radios or a phone app instead.

Firefighters climb in memory of 9/11