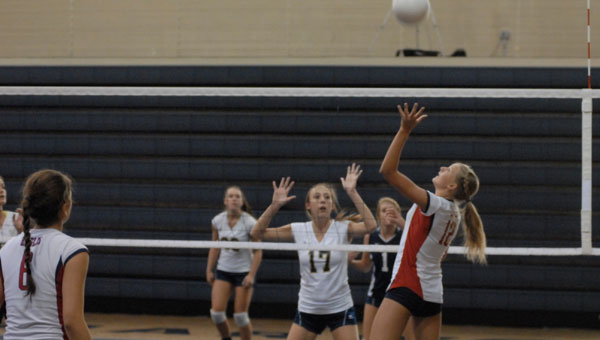 Oak Mountain's Bailey Rueschenberg spikes the ball against Briarwood in the Eagles 3-0 win over the Lions on Sept. 13. (Reporter photo / Graham Carr)

Oak Mountain coach Lance Woods liked how his team bounced back from their first loss of the season to Mountain Brook High School. He said he was glad he was able to play a lot of players.

“Our bench had a lot of good hits tonight,” Woods said.

Briarwood Christian coach Tien Le was not happy in the way his team played.

“We are a much better team than how we played tonight,” Le said. “We knew coming in that Oak Mountain was more talented than we were, but that has nothing to do with our performance and how well we should play.”

Briarwood was led by Mariah Light with three kills and two blocks. Madison Chambers added three kills. Adeline Reiser had a solid night with six assists and two aces while Christie Robertson added four assists.  The Lions were led in digs by Abby Parks with 10 and Hope Donohue with six.

In the final set, Oak Mountain started rotating a lot of different players into the game.  This allowed Briarwood to take a 13-8 lead at the midway point, but Oak Mountain went on a 11-2 run and regained the lead at 19-15.   Briarwood fought back and took the lead again at 21-19. In the end though the Eagles were too strong and finished on a 6-0 run behind Hannah Beach’s strong serving.

FROM STAFF REPORTS The Indian Springs volleyball team picked up a pair of sweeps with a 3-0 win over Tarrant... read more