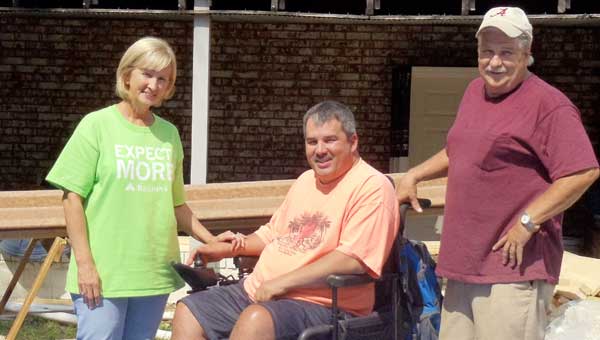 Ruby, Timothy and Terry Cardwell stand outside their Wilsonville home, which Home Depot is renovating to make wheelchair accessible. (Photo by Amy Wilson/Special to the Reporter)

By AMY WILSON/Special to the Reporter

COLUMBIANA – Terry and Ruby Cardwell’s lives were dramatically changed after their son was left in a wheelchair following a 2009 car accident.

When Timothy Cardwell, who is now 40, was finally released from the hospital, the family faced more challenges. Timothy moved into the living room of the Cardwells’ Columbiana home because it was the only room big enough to hold all of his new equipment. However, the move limited his privacy and independence.

Tony Hand, one of Timothy’s best friends, helped the family by building a small bathroom, side bedroom and equipment in the family’s basement. While the rooms helped the family, they were small and difficult for Timothy to navigate.

“We really appreciate Tony Hand for coming in and helping Timothy get started on his apartment,” Ruby Cardwell said.

All of this changed, however, when Home Depot officials heard about their situation. Home Depot renovated the Cardwells’ entire basement strictly for Timothy’s use the week of Sept. 10-14 by building larger rooms that are wheelchair accessible and have plenty of space for all of his equipment, all free of charge.

“Out of this accident, there’s so much good that has come out of it,” Timothy Cardwell said.

Terry and Ruby Cardwell agreed and said they felt the company was sincerely concerned about helping their son regain his independence.

According to James Davis, the brother of a Cardwell family friend and Team Depot Captain at Home Depot, the company puts money aside each year to help people in situations similar to the Cardwells’.

The Cardwells said they are astounded by the generosity of Home Depot and feel each volunteer is a member of their family. They said ever since Timothy’s accident they have received donations and prayers from their community and want to make sure each and every person is thanked for their support.

Ruby Cardwell said her son has regained some movement in his legs, and the family hopes he will one day be able to walk again.

If anyone would like to volunteer to help out families like the Cardwell’s, find out more information can be found at a local Home Depot.