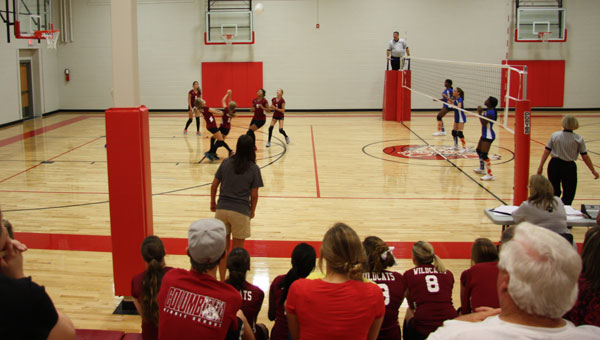 COLUMBIANA – Columbiana Middle School made history when their school hosted its first-ever volleyball event Sept. 17 in its newly renovated gymnasium.

The Columbiana Middle School volleyball team played its home matches at Shelby County High School prior to the gym’s renovations. The gym didn’t have seating for parents and fans before the improvements, but now can seat 400 fans with a new wood floor and a fresh paint job as an additional part of the project.

Monday night’s game was the first time CMS was able to provide seating and concessions for a volleyball match.

“The team was excited but very nervous because we had a huge crowd,” said Columbiana Middle School head volleyball coach Krista Smith. “We played Helena Middle and lost and then beat Montevallo Middle in a tie-breaker. It was great to win at least one game in the new gym in front of the fans.”

CMS has made several improvements the past 10 years. Starting in 2002, CMS has built new classrooms and offices, expanded its media center and renovated PE locker rooms and restrooms near the gym. The expansion of the gym began September 2011 to install seating and was the final phase of a five-year capital outlay.

Funds for the gym expansion didn’t include an official stand on the net, but a contribution from an anonymous source helped provided the need.

Three volleyball games were originally scheduled for the 2012 season, but only the Sept. 17 three-team contest featuring Columbiana, Montevallo and Helena will be played at CMS this season.