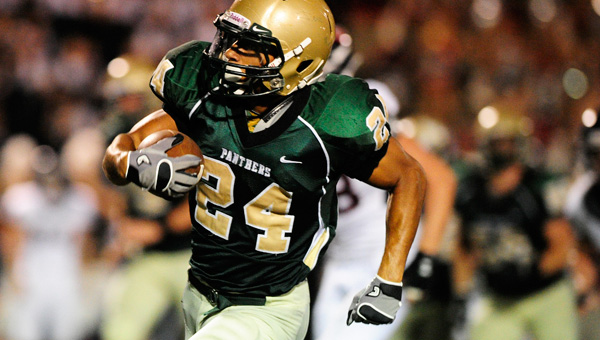 Pelham running back Jacob Nichols breaks free for a touchdown during the second half of the Panthers' 35-15 victory over Oak Mountain on Sept. 21. (Reporter Photo/Jon Goering)

The Pelham Panthers racked up 557 total yards of offense en route to a 35-15 victory over the visiting Oak Mountain Eagles on Sept. 21.

“We had some bad things happen to us early, but our guys hung in there,” said Pelham head coach Brett Burnett. “The kids did a great job, the coaches did a great job. It was a great night for Pelham.”

Rushing leaders for the Panthers were Eli Beall, who racked up a mammoth 238 yards on 21 carries, Moregan Sharp, who recorded 79 yards on five carries, and Devon Mines, who finished the night with 76 yards on eight carries.

Pelham improved to 3-1 overall and 2-1 in Class 6A Region 4. The Eagles picked up their first loss of the season and fell to 2-1 in Region 4.

The Panthers held the Eagles to 239 total offensive yards.

Pelham lit up the scoreboard on its first possession of the night when Mines ran the ball into the end zone from 23 yards out. Austin Bowen’s PAT gave the Panthers a 7-0 lead.

After recovering the second Pelham fumble in a matter of minutes, Oak Mountain tied it up on a 10-yard touchdown run by quarterback Jake Adams. John Michael Miller’s PAT was good.

Adams scored again on the Eagles’ next possession on a 5-yard touchdown run. Scott Hester added the 2-point conversion to give OMHS a 15-7 lead.

Pelham cut the lead to one a few seconds before halftime when Tanner Adams connected with Kenny Meadows on an 18-yard touchdown pass. Bowen’s PAT brought the game to 15-14 at the half.

The Panthers pulled away in the third quarter, scoring on a 39-yard touchdown run by Sharp and again on a 30-yard run by Jacob Nichols. Bowen’s pair of PATs gave Pelham a 28-15 lead heading into the fourth quarter.

Pelham put the game away midway through the fourth quarter when Beall broke free for a 70-yard touchdown run. Bowen’s extra point brought the score to 35-15.

The Eagles threatened to score with a little less than two minutes remaining in the game, but Pelham’s Hunter Stovall picked off Jake Adams on Pelham’s 13-yard line.