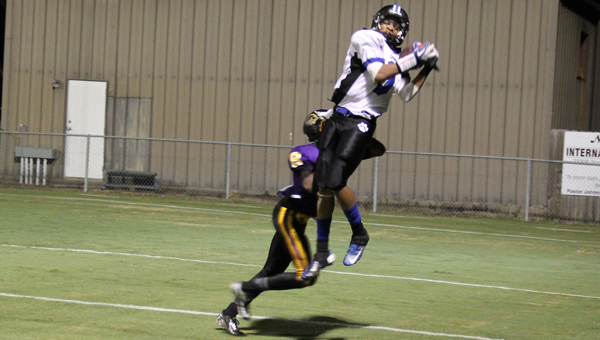 MONTGOMERY — The Kingwood Christian Lions’ Gavin Sumrall led his team to a 40-26 win over Evangel Christian Academy of Montgomery Sept. 21 for their second straight victory.

The junior quarterback threw two third quarter touchdowns while completing 10-of-17 of his passes for 173 yards.

Tyler Harrell kicked off the scoring for Kingwood when he threw a 35-yard pass to Montez Hayes for a 6-0 early score. Micah Wallace added a 5-yard touchdown run later in the period to extend the Lions’ lead to 13-6 following an Austin Dowdy point after touchdown.

The Lions captured a two-touchdown lead when Jonathan Faulkner ran in for an 11-yard touchdown for a 20-6 halftime score.

Sumrall took his turn in scoring by connecting with two receivers for big plays. Hayes scored his second touchdown of the game when he caught an 85-yard pass from Sumrall.

The junior quarterback then found Titus Adams later in the period for a 22-yard touchdown pass for a 33-16 lead headed into the fourth quarter.

Evangel Christian scored twice in the fourth quarter, but it wasn’t enough. Jacob Bussey added a 1-yard touchdown run in the final period to seal up the 40-26 win.

In addition to Sumrall’s 173 yards passing, Harrell added 73 yards in the air with a touchdown.

Faulkner led the Kingwood rushing attack with 67 yards. The Lions totaled 201 yards on the ground.