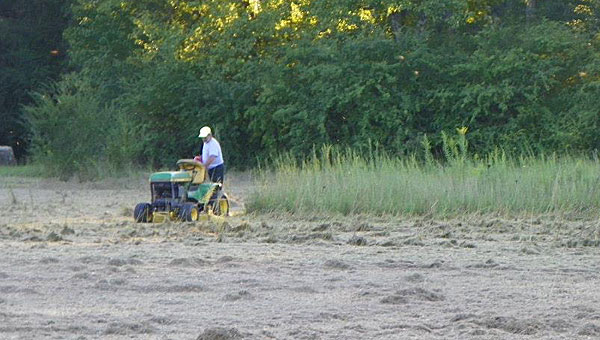 Alabaster Resident Robert Webb has been working to clear a plot of land off Alabama 119 to serve as a community garden. (Contributed)

As the population of the city has boomed over the past several years, Alabaster resident Robert Webb began to notice something.

“A lot of people don’t have room to grow a garden in their yard, and if they do it’s in the shade,” Webb said.

Webb had been looking to help start a community garden in Alabaster “for the past 20 years,” but said his work schedule recently freed up enough to make it happen.

For the past few weeks, Webb has been clearing a large field owned by the Salvation Army adjacent to the Greg’s Golf driving range off Alabama 119. When Webb is done clearing the land, it will feature 70 20-by-20-foot plots suitable for growing everything from potatoes to peppers. Families will be able to rent a 20-by-20-foot lot for $100 a year, Webb said.

“I am getting ready to plow it up before the winter months get here. I will let it sit until spring, and then I will till it so people can start planting,” Webb said. “It’s still in the baby phase right now.”

Once planting begins in the spring, Webb said he will provide all the labor necessary to help the crops grow successfully.

“Basically, they will just have to come out and plant seeds,” Webb said. “Everything they grow is theirs to keep.”

Webb said any left-over or un-needed vegetables grown in the garden likely will be donated to local charities to help those in need.

Webb has been posting updates on the garden over the past few weeks on the project’s “Alabaster Community Garden” Facebook page. Webb will host an informational meeting at the garden at 5 p.m. on Saturday, Sept. 29.

Anyone interested in renting a plot or becoming involved with the project should email Webb at alabastercommunitygarden@gmail.com or call him at 612-0839.