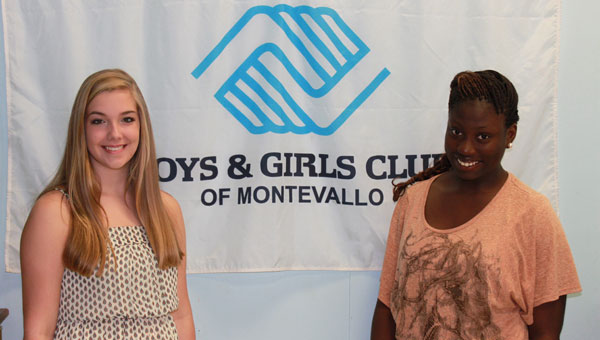 MONTEVALLO – When Nickelodeon called asking for kids to speak up about national issues on its show “Kids Pick the President,” two Shelby County girls answered.

Jaylan Jacobs, 14, and MyKailah Thompson, 13, were counselors in training at Montevallo’s Boys and Girls Club this summer when Director Freda Shivers received an email from Kim Turner, the vice president of development of the Boys and Girls Club of Central Alabama.

“Nickelodeon contacted Kim and wanted kids 13 and up,” Shivers said. “We don’t have members that age, but we had about a dozen counselors in training.”

“I had a discussion with them using the questions,” Freda said of the six kids who were interested. “They were hard questions.

“Those two wanted to do it and had done really well,” Shivers added about Jacobs and Thompson. “It was a great experience for these guys.”

“Kids Pick the President” aired on Nickelodeon with journalist Linda Ellerbee featuring kids’ thoughts on the presidential candidates on specific issues. The first part of the show aired on Sept. 17, and part two will air on Oct. 15.

Jacobs, a Calera resident who attends Indian Springs School, commented during the healthcare portion of the show.

In response to President Barack Obama’s mandatory health insurance policy, Jacobs responded, “That’s kind of like saying the government could say that you have to buy asparagus if they wanted to.”

During a Sept. 26 interview, Jacobs said she “couldn’t believe” what she said about asparagus made it into the video.

“Most of the things I said were Democratic views, but the one thing they picked was my Republican view,” she said.

Jacobs also appeared during the section about employment.

Thompson, a student at Montevallo Middle School, said immigration is one of the most important issues to her.

“If people are already over here, we should give them a chance to stay here,” Thompson said during the Sept. 26 interview. “What makes up America is all different ethnicities and races.”

During the program, Thompson, the daughter of two teachers and one of four children, commented during the tax portion.

“I don’t think rich people are richer just because they work harder than poor people. Poor people work just as hard,” she said.

Church gearing up for pumpkin patch